The new decade has kicked off with a cough, a gnarly one at that. The World Health Organization reports that they were first alerted to a "pneumonia" outbreak in Wuhan City, Hubei Province of China on December 31st, 2019 and the news only got worse from there.

According to WHO: "The virus did not match any other known virus. This raised concern because when a virus is new, we do not know how it affects people."

A mere week later on January 7th, 2020, Chinese authorities claimed to have identified the coronavirus, a flu-like virus similar to SARS and MERS.

While WHO has been working with Chinese officials from the time they were notified, the rest of the world has been subjected to wide-spread myths, misinformation, fear mongering, and false statements and statistics, all mingled in with the truth.

Jane Lytvynenko, an online investigator who works with Buzzfeed News has been on top of keeping track of fake information about the virus and sharing it with the public to help make sure the spread of misinformation is muted and the spread of the truth is amplified. 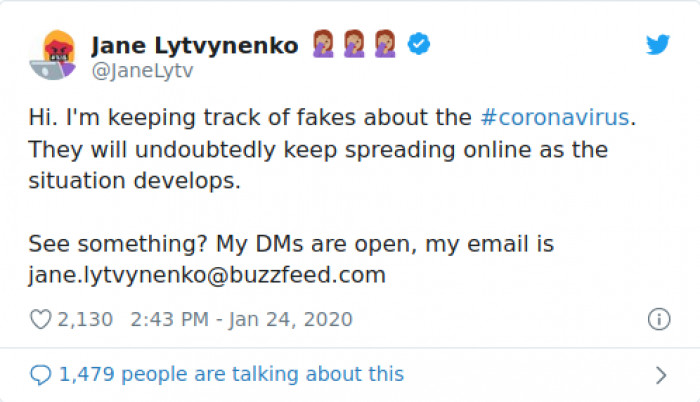 An investigator for Lead Stories: Hoax Alert caught wind that the Hal Turner Show website was reporting incorrect death tolls. The sort of numbers that can easily (and understandably) induce widespread panic. It is completely untrue that 112,000 people have died as a result of contacting the coronavirus. In fact, according to the Washington Post, 4,428 in China have been infected and 106 have died. The number of people quarantined, however, has grown to 50 million. 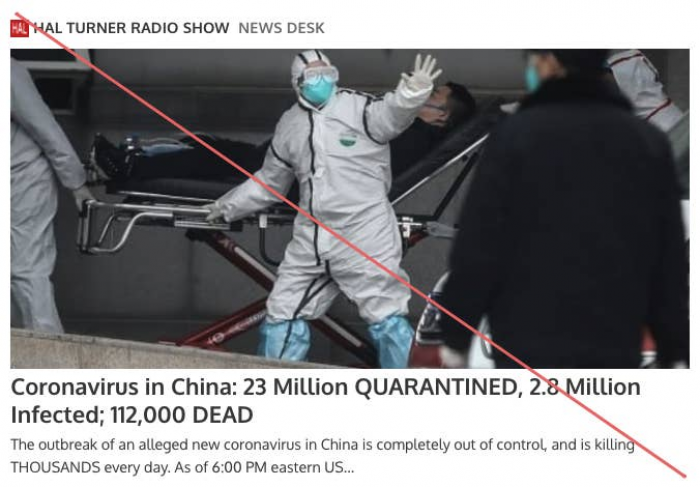 By comparison, the 2019-2020 flu season in the United States has had staggering numbers. According to the CDC: 8,200 people have died, 54 of which were children, and 140,000 people have been hospitalized. 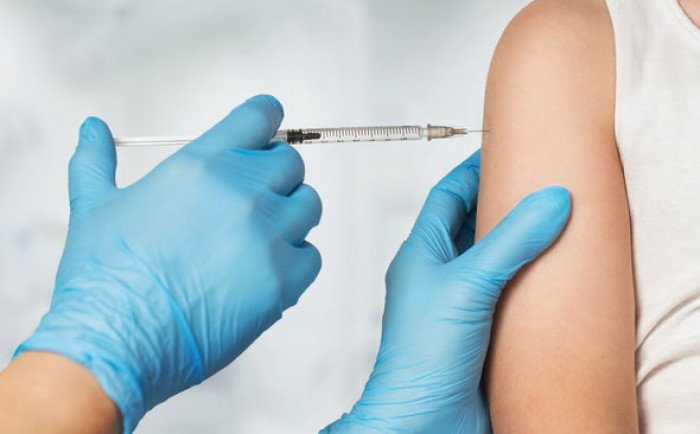 Jane caught wind of this dangerously false tweet that could incite fear and panic and debunked it quickly. It is absolutely not true that people are dying in the streets: they are NOT DYING IN THE STREETS. The director for WHO also did NOT say that each country is on their own. 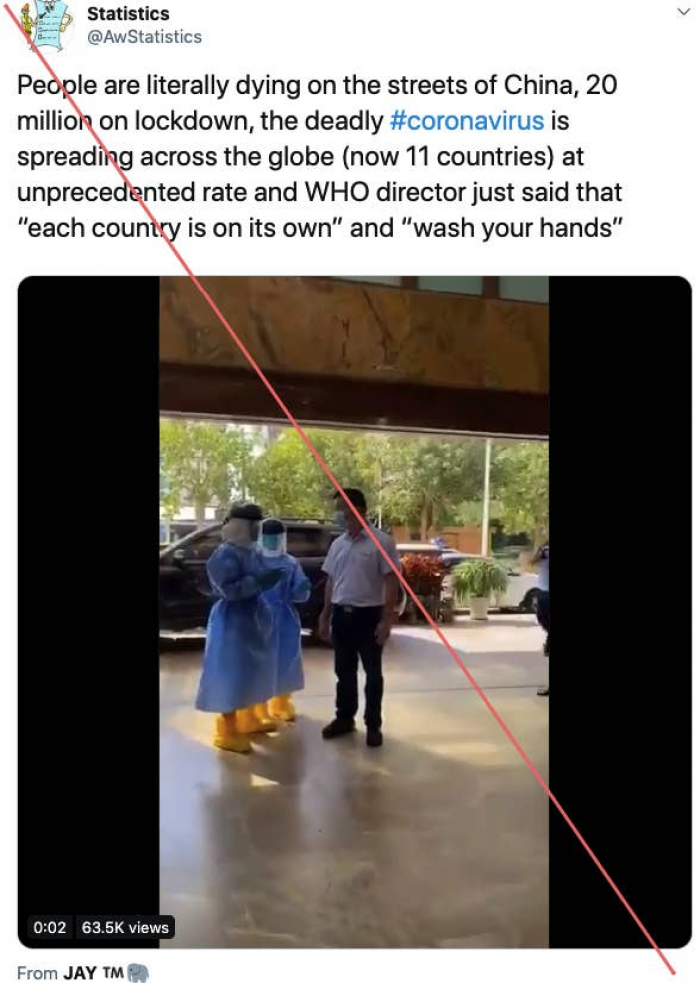 There is zero evidence connecting these images of a woman eating "bat soup" to the coronavirus. In fact, evidence suggests that the coronavirus is linked to a meat and seafood market in Wuhan! 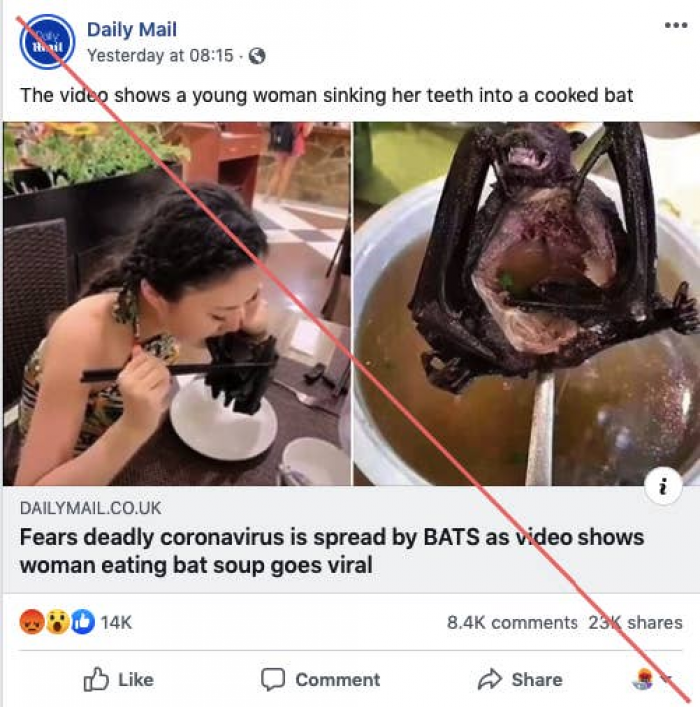 Fact: In 2015 a patent was filed for the potential vaccine development to cover the avian strain of the coronavirus. That strain only affects birds. 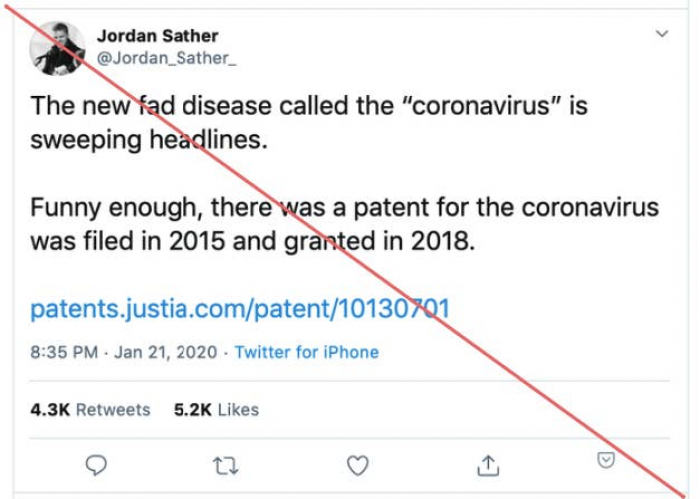 As with any opportunity to get attention regardless of the impact, plenty of people and "news" outlets have spread rumors and fake information with absolutely zero sources at all! If you're unsure whether the information you're reading could be true or false, think about it critically: does it sound sensational? Are there any credible sources provided? Is anyone credible also sharing the information? 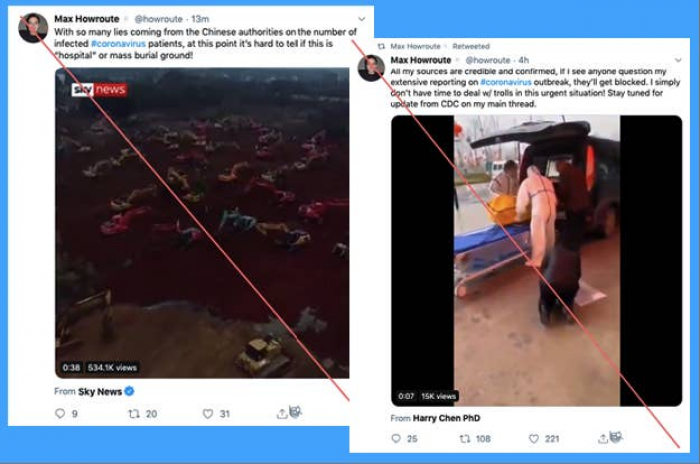 9gag is usually referred to as a fun meme site, not a source for credible news in most cases. That should be your first raised eyebrow about this story of children being abandoned in an airport. 9gag's popularity helped spread this story across multiple social media platforms but absolutely zero sources have confirmed it as of now, according to Jane. 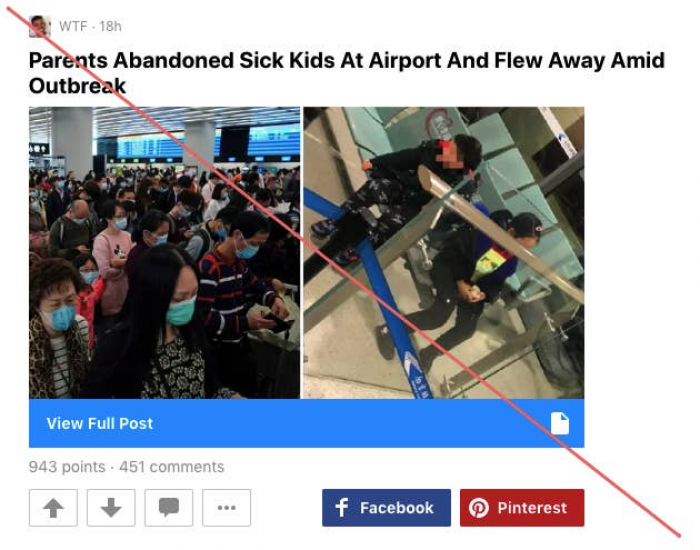 An unreliable website reported that FEMA encouraged enacting martial law to contain the coronavirus. FEMA, the Federal Emergency Management Agency is a US government organization established by Homeland Security to organize first responders to national emergencies.

Politifact fact-checked the story and dubbed it false. 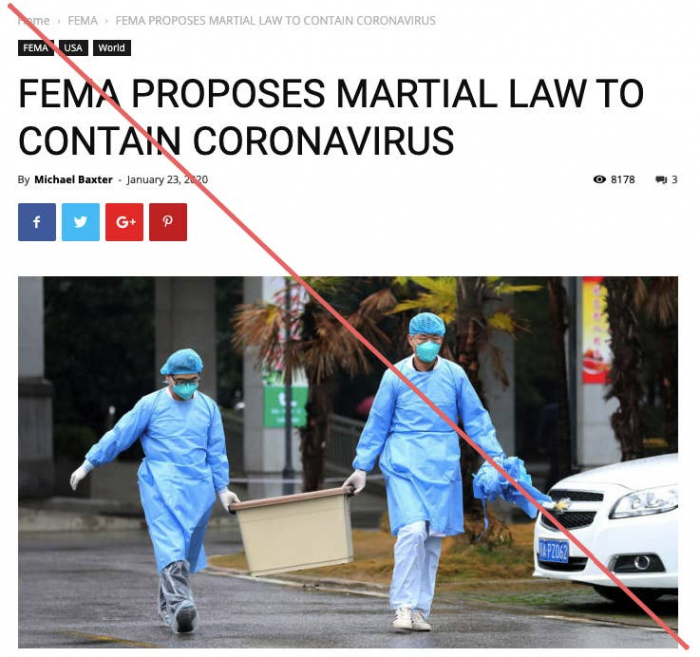 On January 29th, WHO reported there were 68 confirmed cases in 15 other countries besides China. NBC reports:

Coronavirus cases in the U.S. are confirmed by the Centers for Disease Control and Prevention, based in Atlanta. As of Jan. 29, 165 samples from 36 states were being tested; five have come back positive, and 68 have tested negative. The rest of the results are pending.

Only 5 cities have had confirmed cases of the coronavirus in the US.

Sometimes myths and misinformation looks a lot more like a misrepresentation or twist of information and facts, and those situations are often more dangerous than blatant lies, especially for people prone to sensationalized information.

In July of 2019 the CBC reported on two Chinese scientists being expelled from Canada. However, there is absolutely zero mention of the coronavirus in the news report and absolutely zero evidence to support this conspiracy theory. 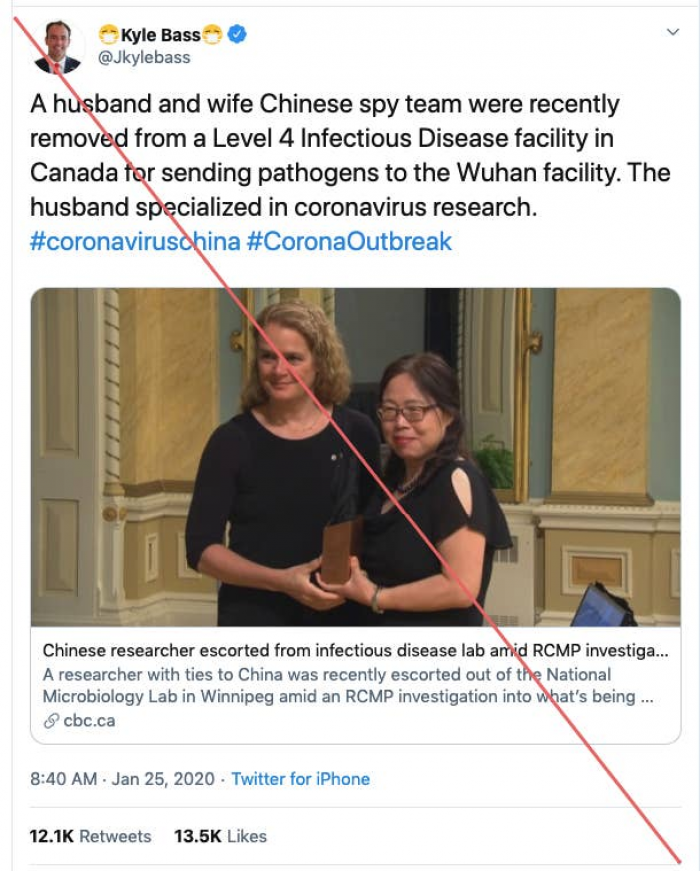 10. Jane also has been cataloguing, "inauthenticity" in reporting on the coronavirus and the Canadian article from June 2019 being shared a lot now in January, 2020. 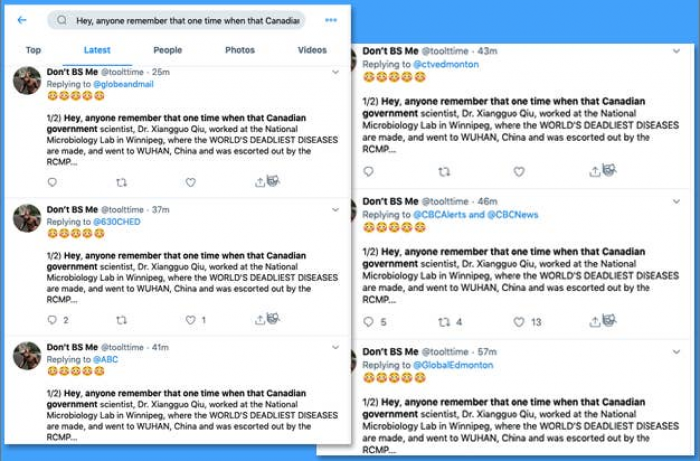 Konrad Itrube highlights the problem with this information being spread as is. While 3 patients have been admitted to the hospital in Tel Aviv with coronavirus symptoms, the virus has not been confirmed and that is an important distinction. 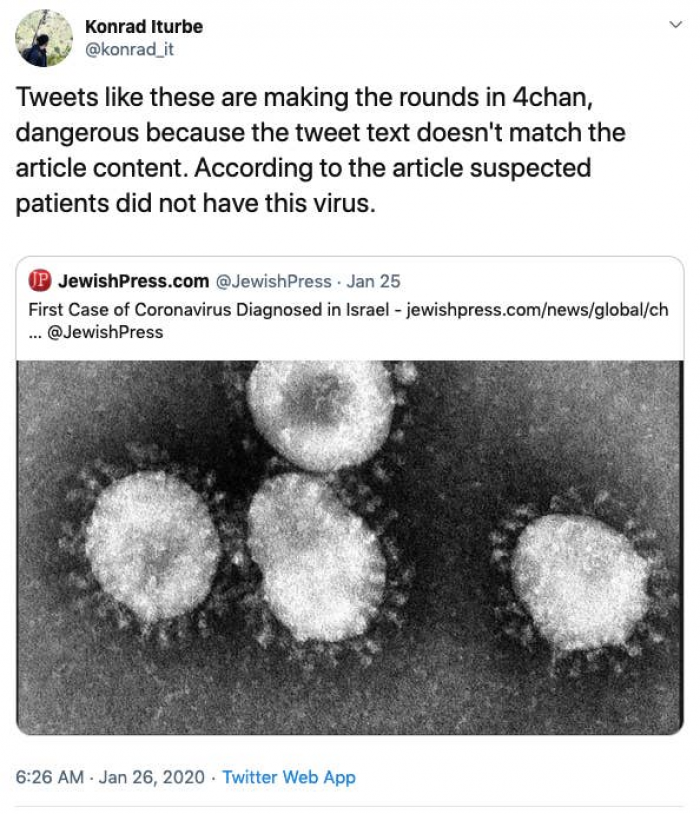 12. Are the people of Wuhan prrotesting in the streets?

If they are, it's not depicted in these tweets with videos. The video featured in some tweets has been making it's away around the Internet since, at the very least... July of 2019, according to Jane. 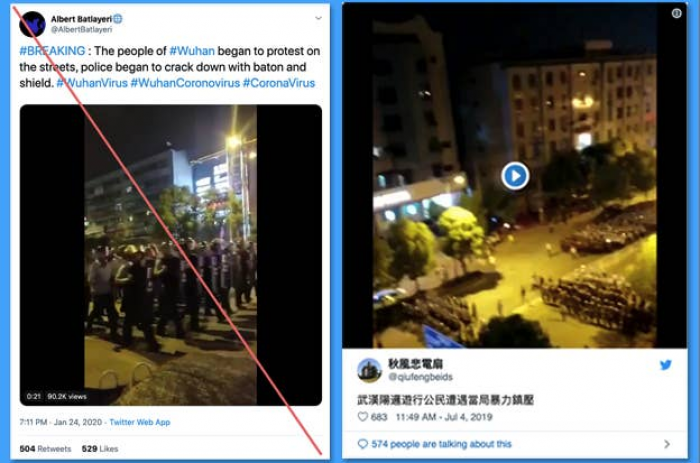 13. Building a hospital in 16 hours would be impressive... if it were true. Alas, it's #fakenews.

The photo seen in the tweets is actually from an apartment listing, Jane reports.

Even worse, Jane reported that this false information was spread by official Chinese channels! 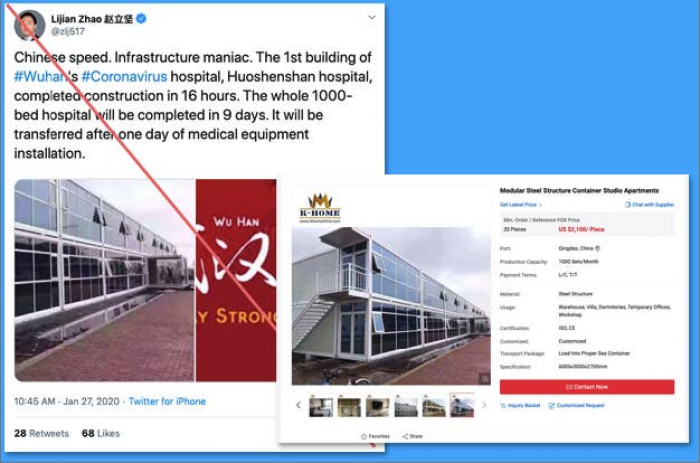 14. For most people, fireworks are the sound of pure joy.

If you're confused and scared though, they might sound like gunshots. Fortunately, the sounds heard in this viral video are being falsely reported as gunshots and are instead: fireworks. 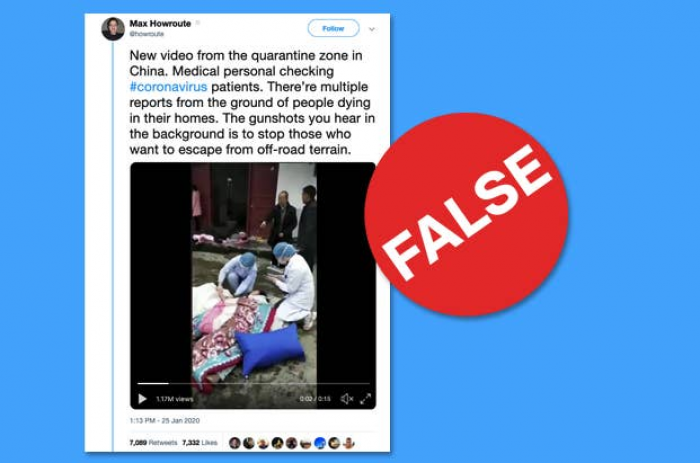 15. Would WhatsApp spread an official message from the "Canadian Department of Health?"

Well, the official report from Canada regarding the Corona virus does not match the information claimed in these messages being sent through WhatsApp. Not only that, but there are multiple spelling errors. Not everyone's spelling is perfect, but officials from the Canadian government have a good habit of spell checking and consistency.

To put it bluntly, these messages are not from the Canadian Department of Health and the information is not true or reliable. 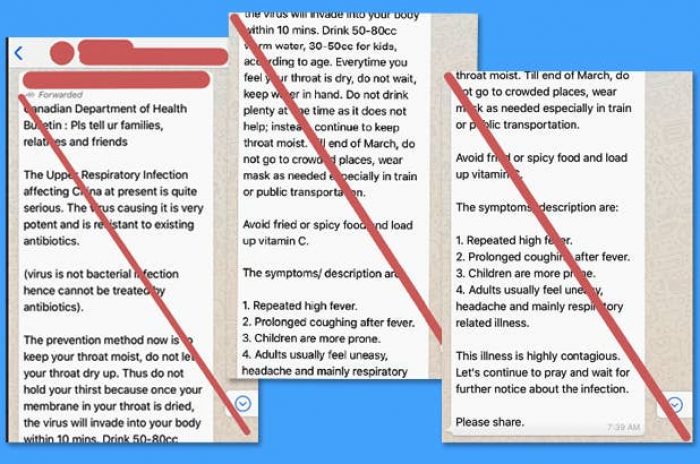 Another message being spread on WhatsApp appears to show a list of Toronto schools affected by the coronavirus. Jane Lytvynenko reports the list is false and "not contained in the official City of Toronto release on the coronavirus." 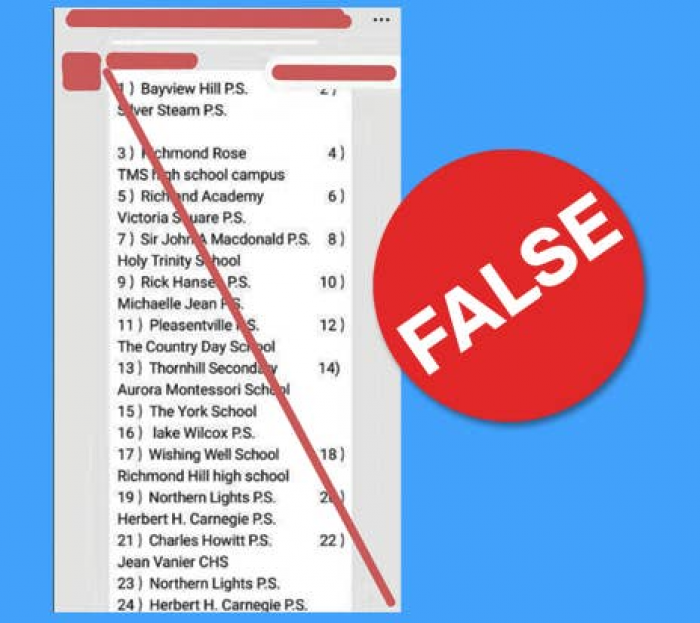 17. Fake news reports regarding the Coronavirus have even spread to Australia!

A member of parliament had to turn to social media to publicly debunk a fake press release making rounds! 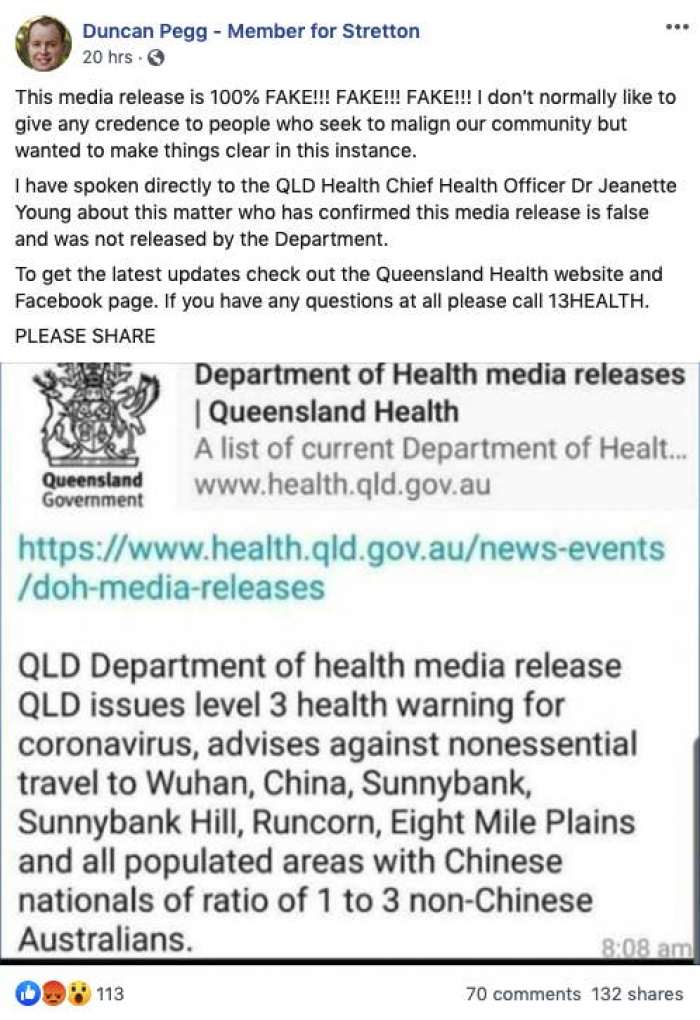 18. Ryerson University's website spread a false claim there was an outbreak at the school.

"There are no cases of coronavirus at Ryerson University." 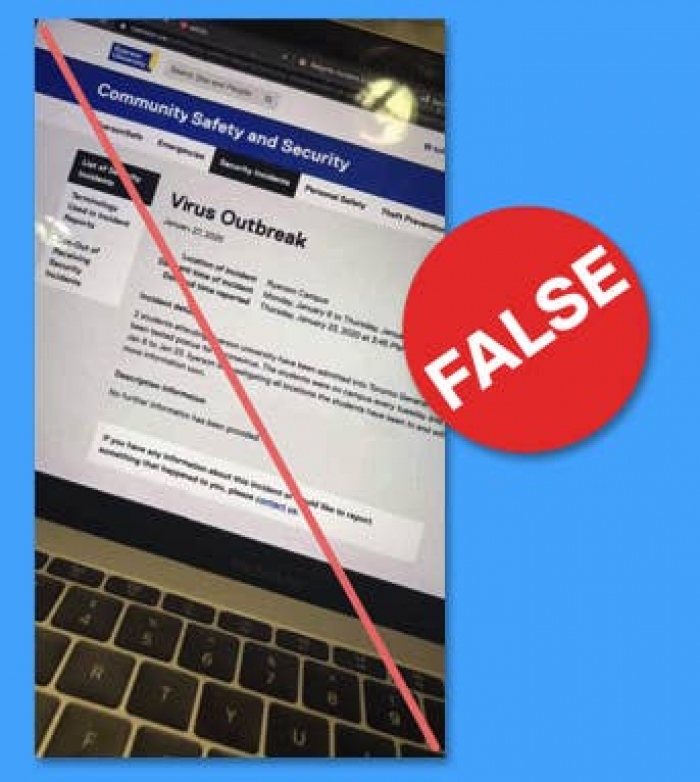 19. According to Jane, McMaster University, "also put out a press release about a fake coronavirus report."

After a photo of a sign with outbreak information spread quickly, the school released an official statement confirming, "that this sign was false, and there is no cause for concern." 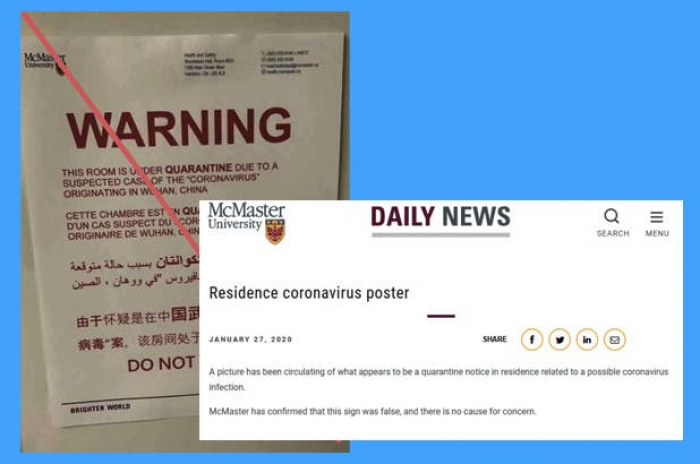 For a group of people who claim big pharma cares more about your money than your health, they sure are quick to offer miracle cures backed by zero scientific evidence, aren't they?

There have been many false miracle cure claims. Vitamin C will not cure or prevent a coronavirus infection, as posts and videos on Facebook falsely claim.

21. Not that cannabis isn't cool and all, but it's not going to cure you of the coronavirus if you are exposed to it.

In fact, we can't find anything about cannabis helping with the flu even, other than from a weed-positive website with unreliable sources. Don't depend on pot to heal you of flu-like illnesses, folks... or consider it adequate prevention. 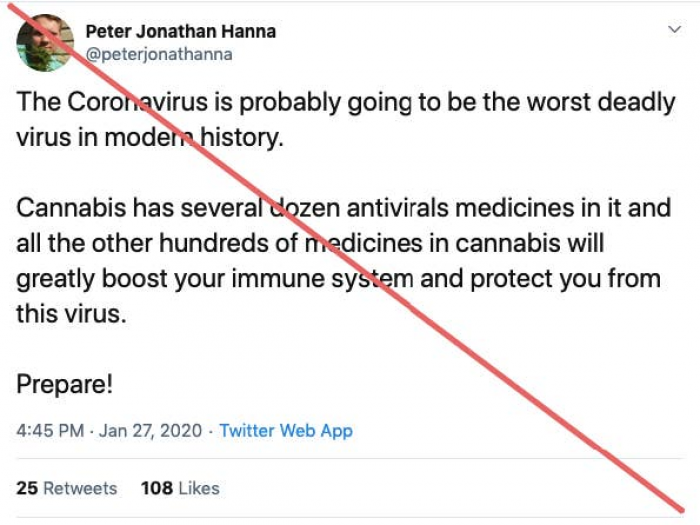 22. According to Jane Lytvynenko, the Indian government has even falsely advised that, "homeopathy can help prevent and manage coronavirus symptoms."

So far, no natural remedies have been proven effective for managing the flu-like virus. 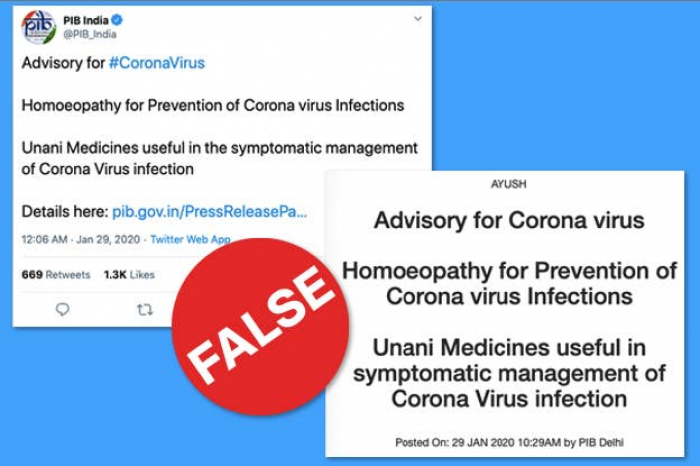 23. How about those air purifiers?

Companies have attempted to seize a moment of financial opportunity to promote their businesses at the expense of your fear and vulnerabilities.

Jane says, "air purifiers will also not help with coronavirus." 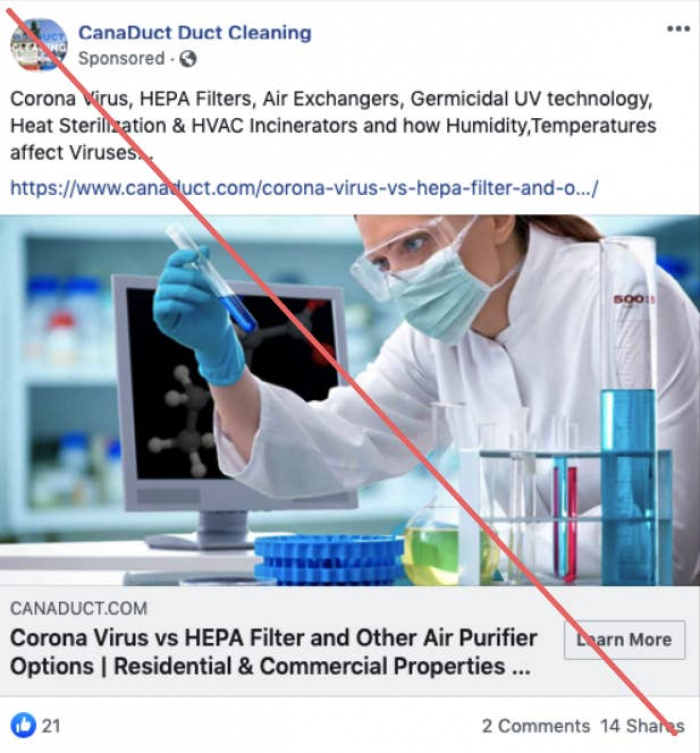 Social media is no stranger to quickly spreading false information, especially if it is spoken with enough "authority" to sound feasible. This message dubbed fake as Lytvynenko reports, spread quickly across multiple social media platforms from Facebook to WhatsApp and even Reddit before the Australian communications minister had to publicly refute it!

“When it comes to the coronavirus, legitimate and authoritative sources online include communications from the Federal Department of Health’s website health.gov.au, state health department websites, the Federal Minister for Health Greg Hunt and his state counterparts, as well as Australia’s many well-known and trusted media organisations.” 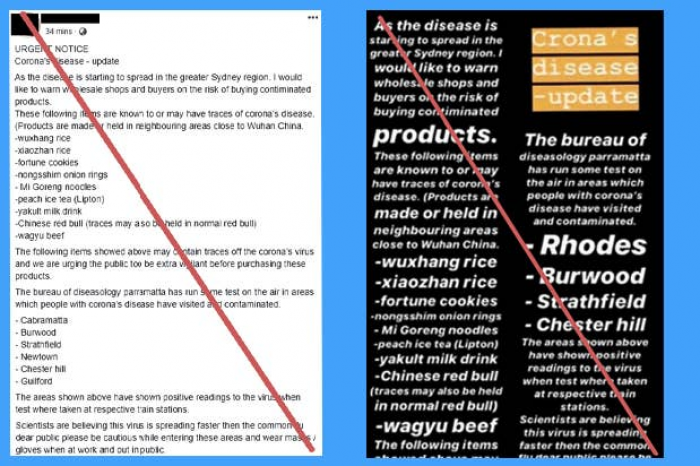 25. Bailey Hurley, a Crime & Safety reporter, pleads with the public not to click this false news report. 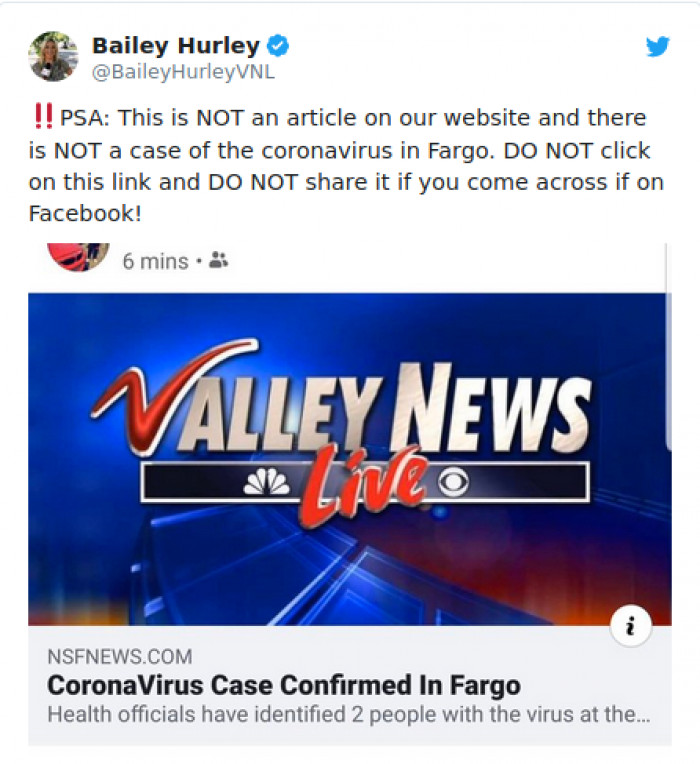 26. Don't get your news from TikTok, in the first place.

This viral video of a doctor or lab technician pretending to contract the coronavirus had to be debunked by The Daily Dot. 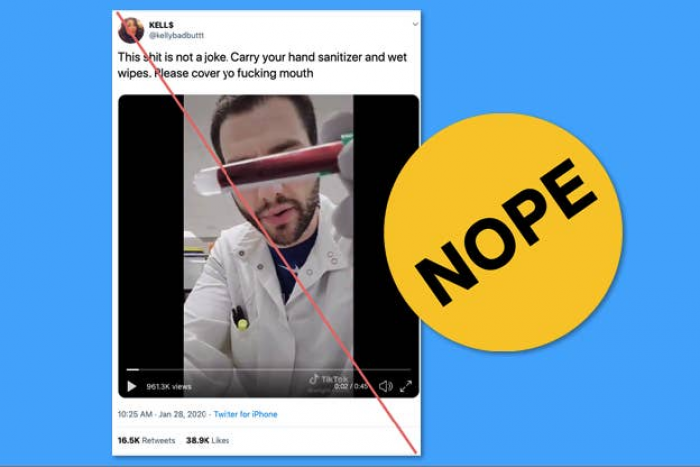 You can keep up with Jane Lytvynenko as she continues to keep track of all false and fake coronavirus information by following her on Twitter.

Don't forget to share these busted myths with concerned friends and family! The only way to combat the lies is to spread the truth.