Has anybody ever had to deal with an unpleasant and obnoxious neighbour? You know, the kind that whines like a jet engine shutting down? Sometimes, disputes can spiral into abject nastiness, like what happened with the young man described here under.

This young man also happened to be a owner of a cocker spaniel, and the neighbours took umbrage over the doggie's poop. The dog restricted its bowel movements to its own yard, and the owner would clean up accordingly.

This was not good enough for the miserable gits next door, who made a threat against the dog. Threatening a dog for pooping in its own yard is a low act, and the owner responded in a manner that was deliciously dastardly, and designed to wound them in their own personal Achilles Heels: the borderline sociopathic orderliness in their precious yard. He sneakily planted 5000 (yeah, you read that right - 5000!) dandelion seeds in their back yard, before sitting back and enjoying the mayhem that ensued!

A fine example of a pup, it is.

Here's the guy's story, and his revenge:

This is a sensible and thoughtful dog owner, wouldn't you say? 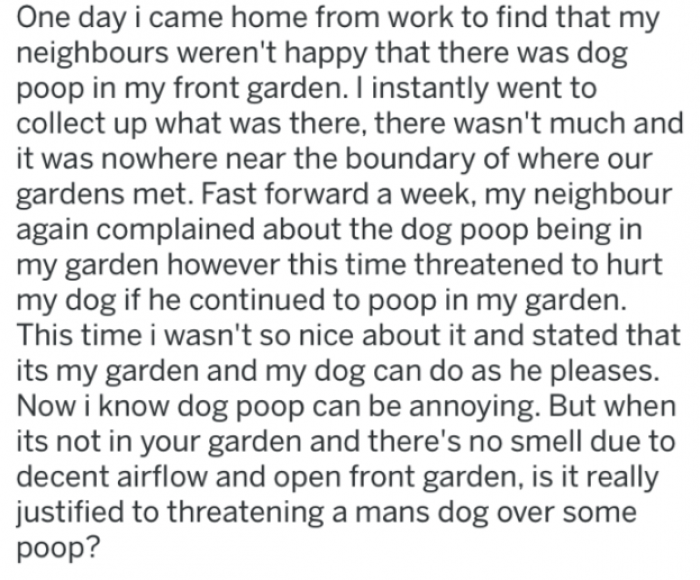 Yes, the neighbours were not happy

Little steps first - we all have to crawl before we can walk, don't we?

To borrow from Josef Conrad: 'The horror! The horror!'

This can be justified

Some people like to be part of the solution

Learning a Lesson on this Most Dogged of Issues

So, the lesson to be learned here is: don't aggravate a dog owner! If you have a genuine grievance, approach it with maturity and with a pleasant, open manner because we all want to live harmoniously in our own neighbourhoods, don't we? But if you are going to spout vexatious venom toward a dog owner, don't be surprised to discover you are the subject of devious revenge!