Conspiracy theories... there's a lot around. A lot. I have some major favorites, I don't necessarily believe them, they're just my favorites. They're funny, they're wild and they make me laugh.

I LOVE that there's people who think the earth is flat and that there's an escalator that goes to the moon. An escalator. Hear that again. AN ESCALATOR!!!!! WILD, right?

I think JFK was murdered by the CIA. I believe that. I think there was multiple shooters, and I think it's a tragedy.

I think 'The Simpsons' writers know more than we do... or are SERIOUSLY lucky.

I think Anti-Virus Software companies create viruses, too, because duh!

Recently, someone posted on Reddit asking people to share their fave conspiracy theories that they believe are true and the answers were pretty good. Most of them weren't too off the wall, and they were pretty interesting, too. Check them out below. 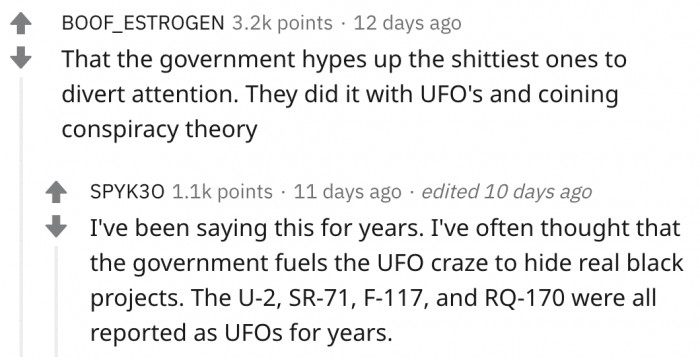 I can actually believe this. It's like selling Avon lol

Truly believe this. IKEA did this with their glass food storage containers and lids.

"The truth is out there."

I also thought it was weird how much they use in commercials. That's a lotttttt of foaming.

100% BELIEVE this. Also, I miss being able to plug headphones in BIG TIME.

If you believe this... you'll believe anything.

Diet Coke is the only Coke I care about.

I don't think this is intentional as much as common sense that a film glamourising a profession will encourage people to pursue said profession. Top Gun was a banga, though.

I laughed. For real.

Could have been mis-information, but this could very well be true.

The flight that fought back?

Any publicity is good publicity.

Nope. I think he killed himself. 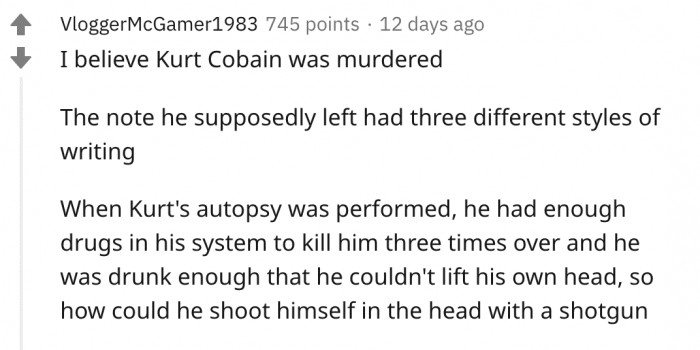 Tik Tok is addictive and I won't say a bad word about it.

This isn't a conspiracy. This is the #truth! LOL