Being short definitely comes with it's advantages and disadvantages. One artist decided to illustrate precisely which advantages were the very best, and the internet is thanking her a thousand times over it.

Illustrator artist Brisa is the creator of the series. She uploaded her very first comic onto Instagram in 2017. Since then she's received quite the following, over 285k people in fact.

Her comics consist of her daily life with 'the man in her life', Joan and their Labrador who's name is Marly.

She's so humbly spoke about the fact that she has never seen herself as an artist, but that she just loved to draw. That she used to doodle in high school and college instead of taking notes.

Then she pondered over making a comic strip about her daily life. And after a year of letting it mull in the back of her mind, she decided to dive in head first.

From the day she first began she shared it with the world. Three Under Rain just so happened to be her first.

Her inspiration for the Perks of Being Short series actually began with Short People Problems,

“I started with the series Short People Problems since I thought it would be fun to laugh a bit about the small daily struggles that short people have to face. They were super well-received, but in the comments, there were always people saying how they didn’t like being short, or how that made them feel less confident or feel that being short is a problem itself.”

“Now in my late twenties, I’m totally fine with my height of 152 cm, it’s who I am, and I like it, but there was a time when that was not like that,” she said. “So I thought it could be great to make a parallel series, focused on the perks that being below average height have.”“My intention with all that was to show that, being short is not bad or good, it just has its own pros and cons, like any other stature. And I never could have thought of the great reception it had, a lot of people liked them, so why not keep going?”

We never have to worry about ducking for a doorway. 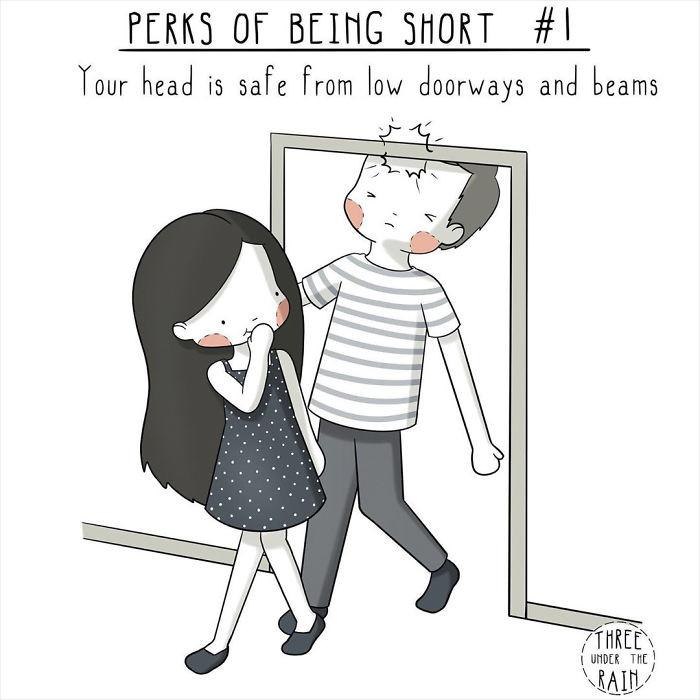 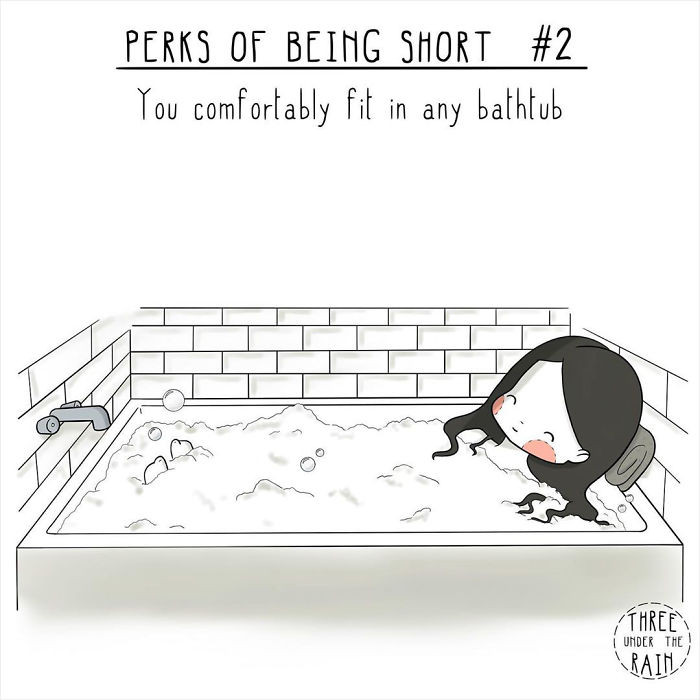 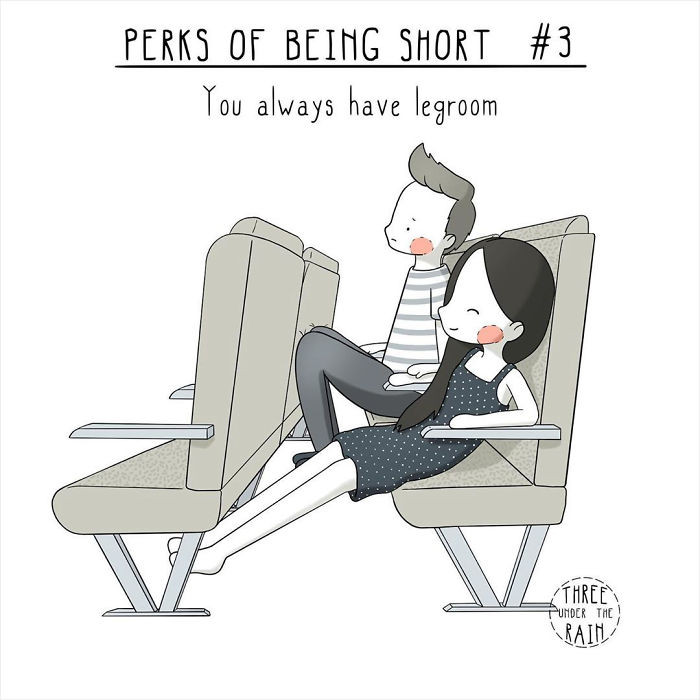 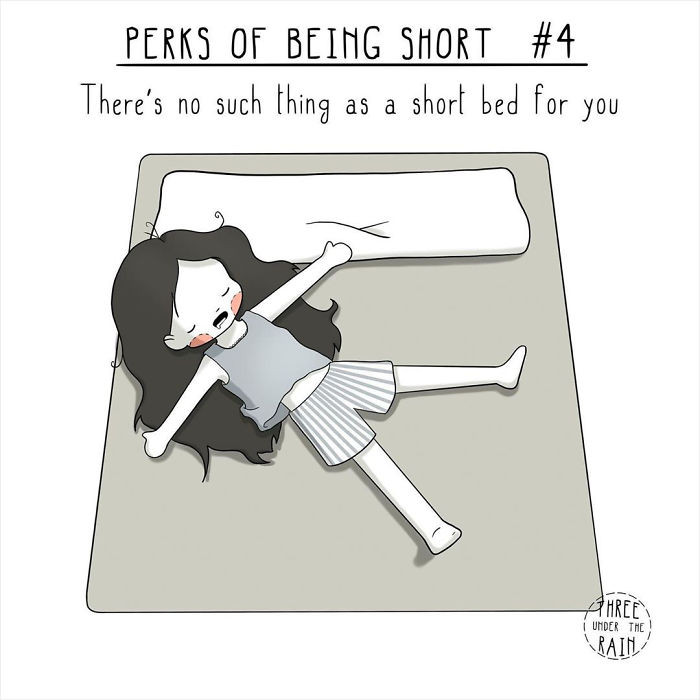 Comfort is of the essence. 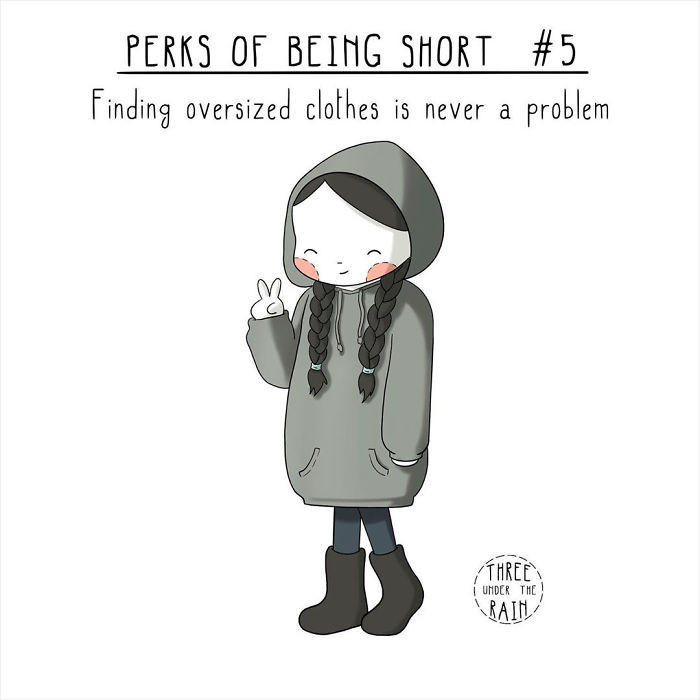 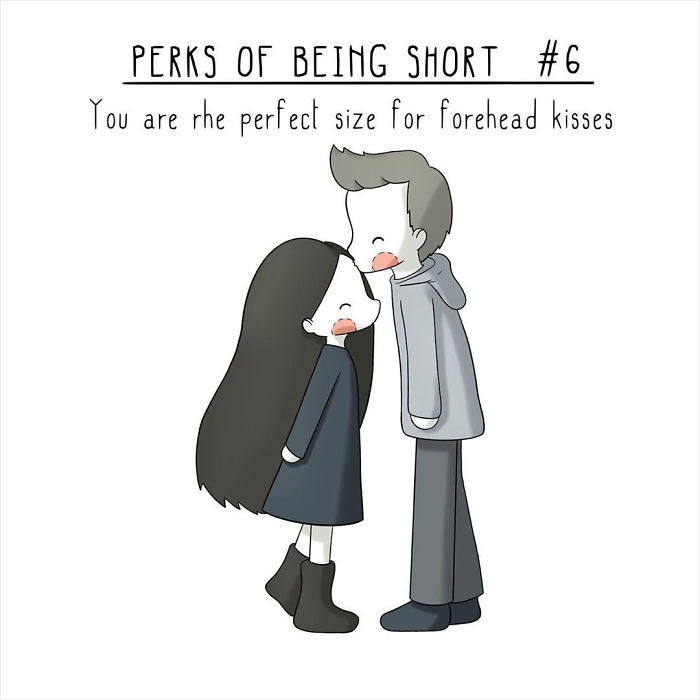 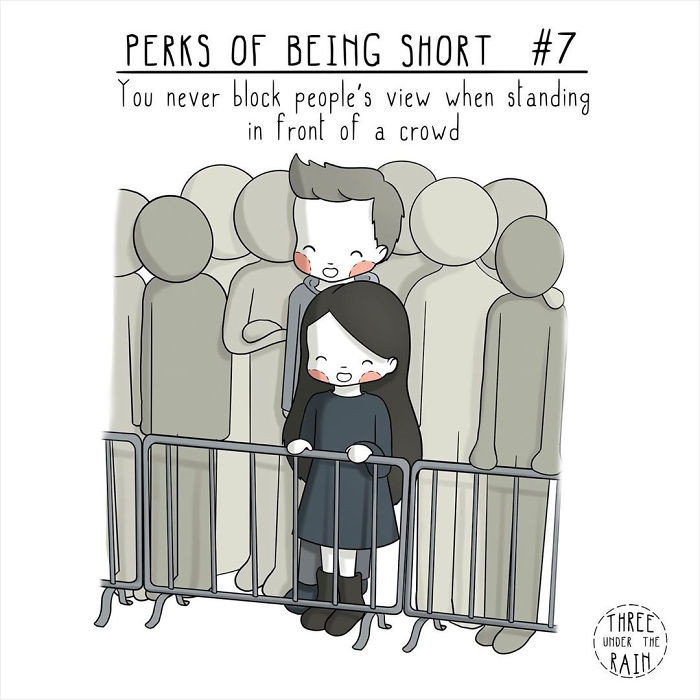 Probably my most favorite perk. 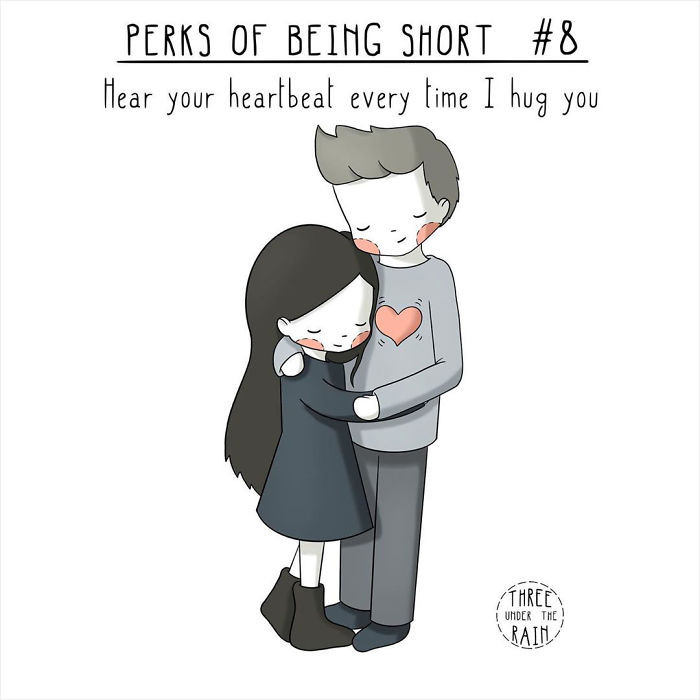 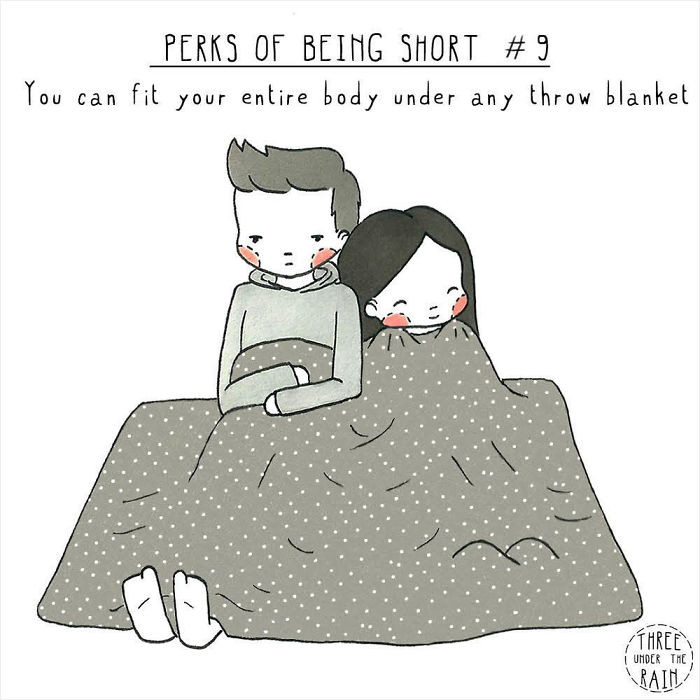 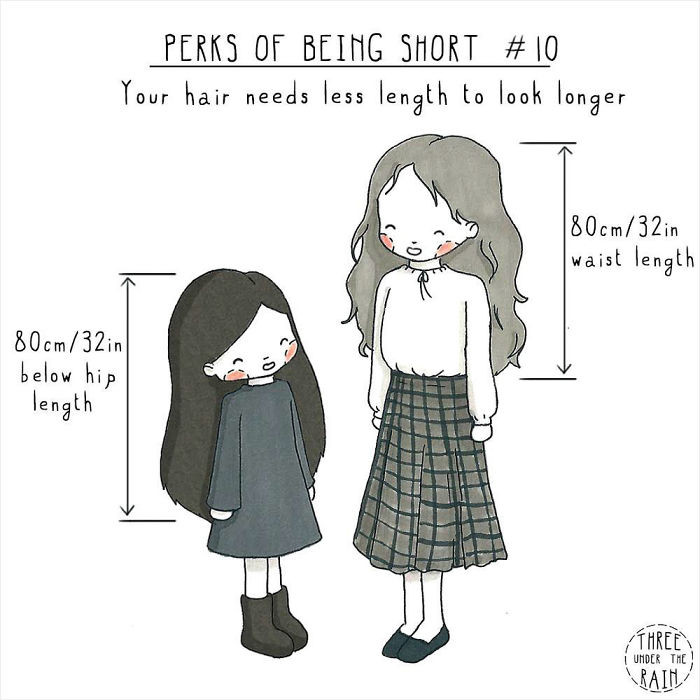 "Woud you mind moving over just a step?" 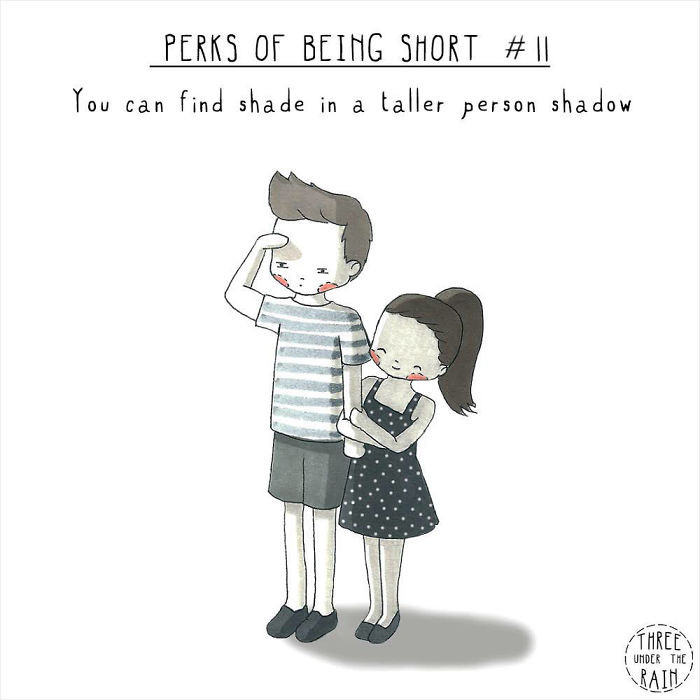 Even though I'm not a high heels gal, I love seeing short women feel so empowered by their heels. 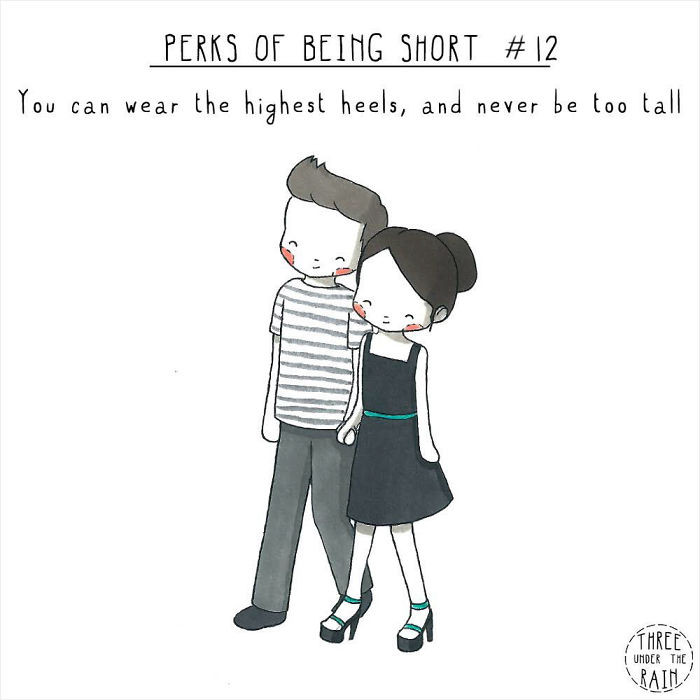 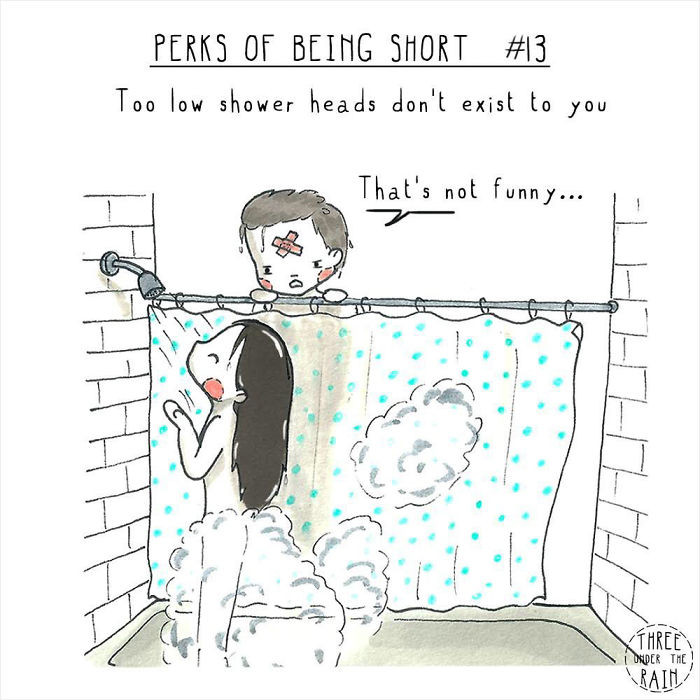 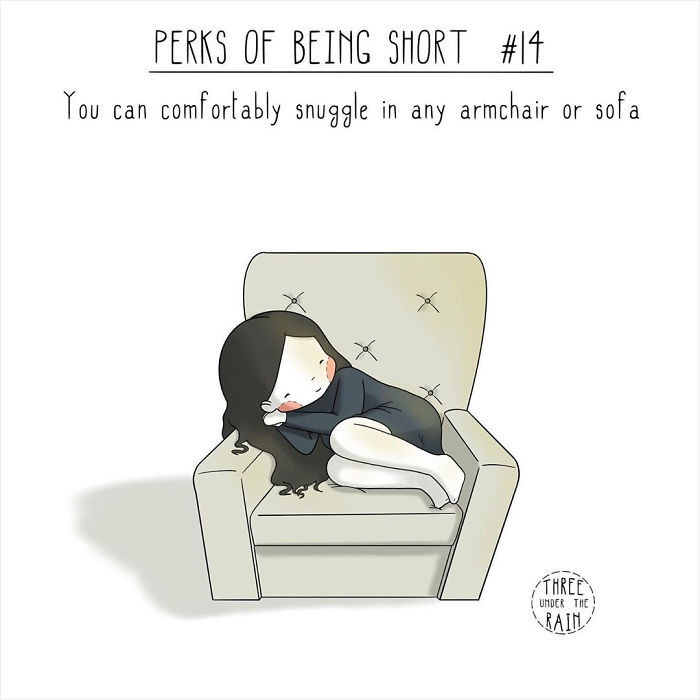 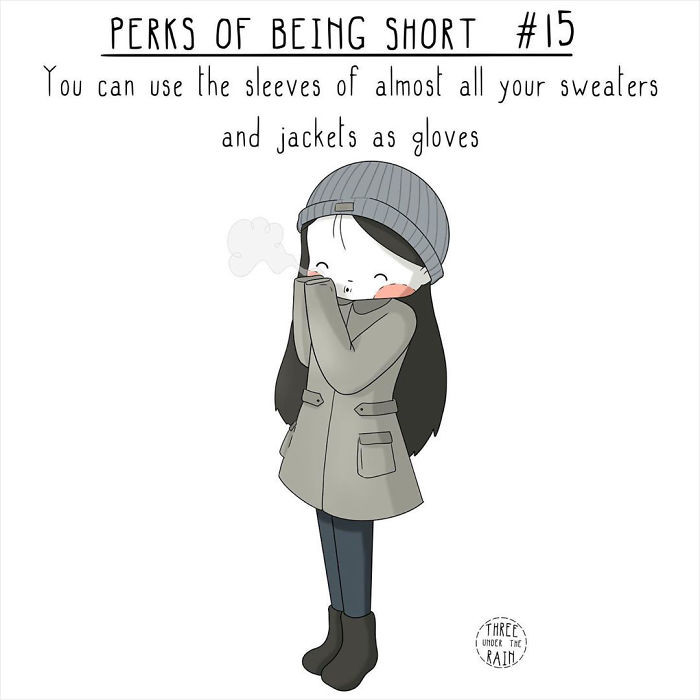 I love how humble she is in her work, especially when speaking about it.

“I think that this was a key factor in me still doing this two years later. I received a lot of feedback and encouragement sharing them online and that’s what made me be regular in drawing and motivated me to keep creating, and therefore what really made me improve.”She continued: “I’ve always liked art, in fact, when I feel a bit overwhelmed by the Three Under the Rain posts, instead of taking a break from drawing, what I do is just draw other stuff, in a different style, and then I feel recharged to go back to the comic.”

“And most of all, every time somebody sends me a message telling me how much they relate to my posts, how my posts cheer them up, or how much they like sharing them with their loved ones… just knowing that I can make some people happier with my work, is what really keeps me passionate about the comic.”

Forever slamming my head into things.

All about them tubs y'all.

It's always the bathtub one.

Brisa spoke of her loves,

“I love hearing my fiance’s heartbeat when I hug him, but I think that always having legroom, especially in trains, planes or back car seats, is way a better perk."

She then encouraged anyone who would like to become an artist themselves,

“just do it, start, don’t wait for the best time, because it doesn’t exist.”“And then find what motivates you to keep learning and improving.”

And even threw out a shout out,

“I’d finally like to thank all my followers for their support and love, you guys are the ones who made this possible.”

“I love hearing my fiance’s heartbeat when I hug him, but I think that always having legroom, especially in trains, planes or back car seats, is way a better perk.