The Prime Minister wanted to visit a town devastated by the fires, but the unwelcoming residents made him cut the visit short.

Cobargo, which is located on the New South Wales South Coast, is one of the towns that suffered a lot during Australia's bushfire crisis, which has claimed the lives of 18 people, destroyed 1,298 homes and more than 3.6million hectares of land.

This small town lost an entire main street, one father and a son, and dozens oh homes when the fire swept through it on the New Year’s Eve.

Mr. Morrison went to Cobargo to meet with locals who had lost everything - but the visit quickly became ugly.

He heard that he 'should be ashamed of himself' while others said he is a ‘Scum-mo' for 'leaving the country to burn'. 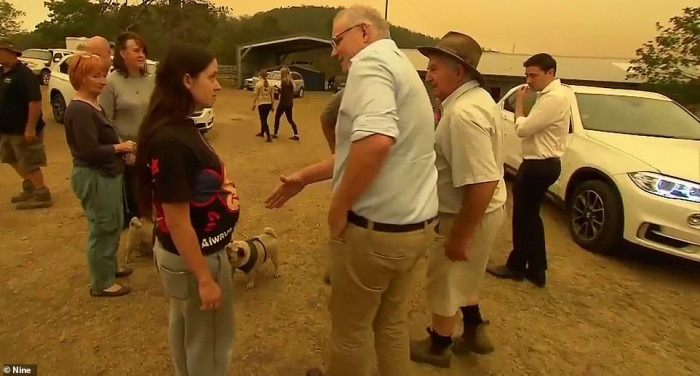 250km stretch of the New South Wales south coast (pictured) had to be evacuated as dreadful bushfires endanger the area, along with an area of the Shoalhaven between Burrill Lake north and Nowra 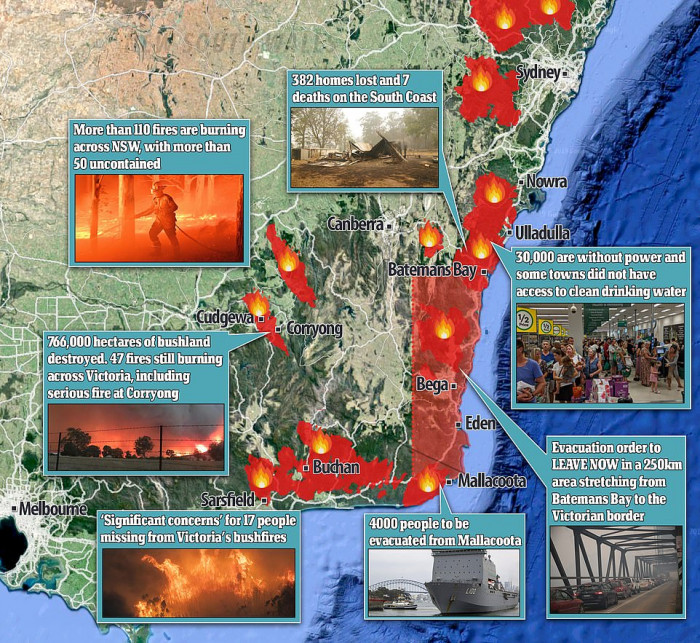 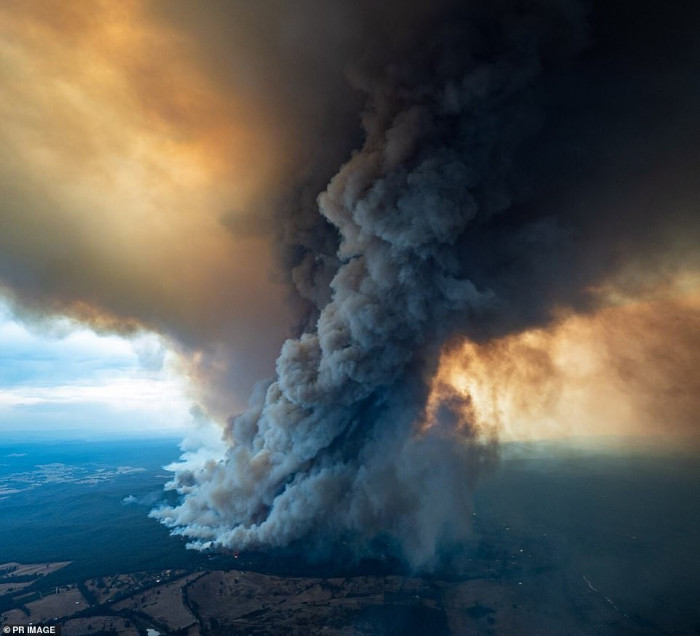 One local didn’t want to shake his hand until the PM pledged more support to volunteer firefighters.

'I'm only shaking your hand if you give more funding to our RFS,' the woman said.

Instead, Mr. Morrison took her hand and shook it himself, and then turned his back on her mid-sentence and moved on to another man.

'So many people have lost their homes,' the woman told while holding back tears.

She was comforted by another man as the PM was leaving. She yelled after him: 'We need more help.'

This whole incident was described as 'disturbing' on social media.

'What is most disturbing about this extraordinary video is our PM forcing a young, clearly distressed woman to shake his hand followed by another male putting his arms around her telling her to ''shush'',' one woman said.

'Proud of people in Cobargo for speaking their mind on how they've been treated! What does ScoMo do? Walk away from real people with real issues affecting them now. Disgusting.'

'I can understand him leaving when the men got aggressive, but I can't believe he walked away from the woman pleading for help,' another person added.

Another woman, a town resident, brought her pet goat along to the meeting, and she told Mr. Morrison the small town was 'forgotten' during this disaster.

'This is not fair,' she cried. 'We are totally forgotten down here. Every single time this area gets a flood or a fire we get nothing.'

'If we lived in Sydney or on the North Coast we would be flooded with donations and emergency relief.'

A Cobargo resident, Gary Hinton, looking in disbelief at the rubble that is left after a fire tore through the town on New Year’s Eve 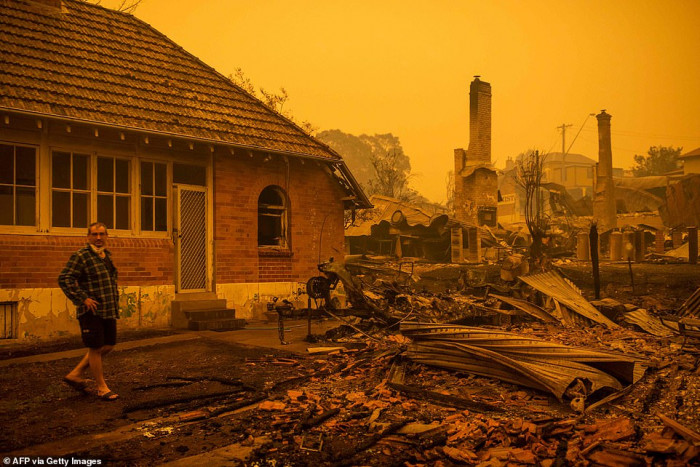 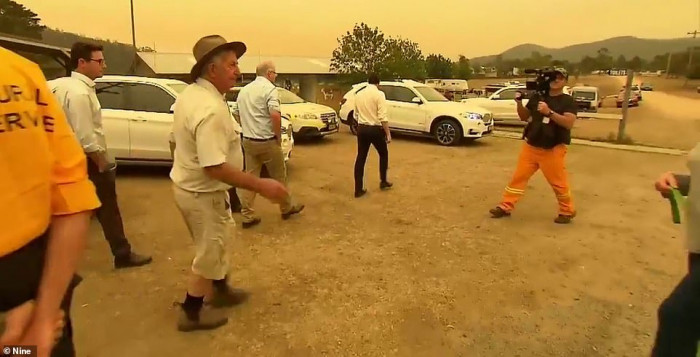 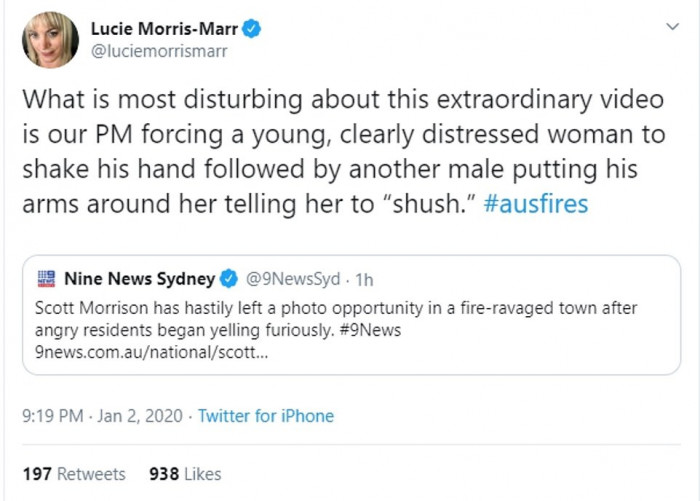 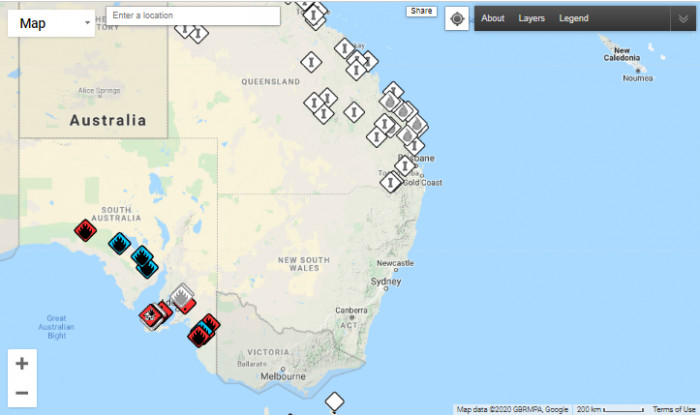 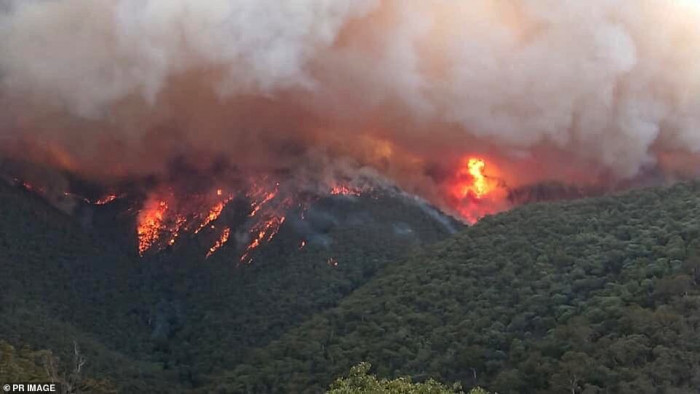 A satellite image of the Clyde Mountain Fire south of Sydney 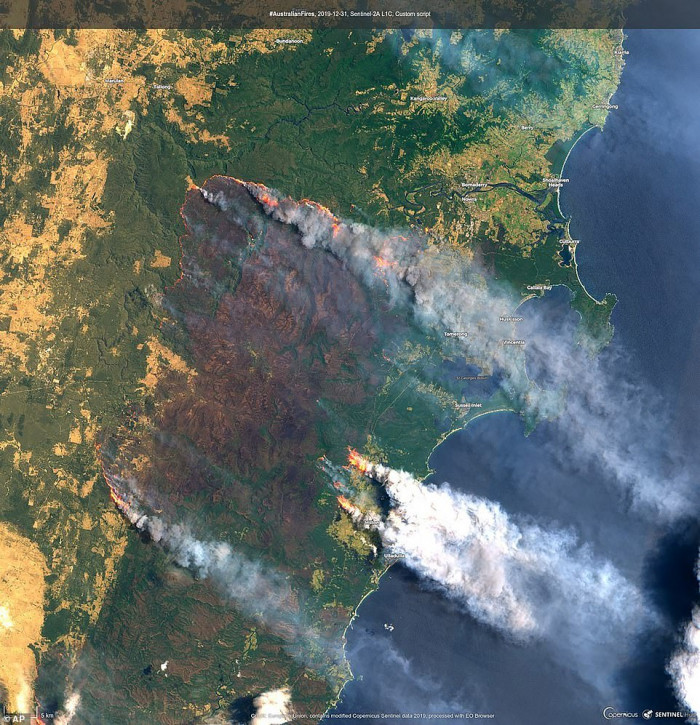 The PM didn’t have much support from the rest of the group which had gathered on Thursday.

Another yelled: 'You won't be getting any votes down here buddy. Who votes Liberal around here? Nobody.'

'You control the funding, and we were forgotten,' a woman said.

Soon after arriving, the PM went back to his car and was driven away.

While he was driving away, furious locals resumed yelling at his car, calling him names and questioning why his home of Kirribilli wouldn't burn down.

'Go home to Kirribilli. Why won't that burn down after the fireworks?' another local shouted. 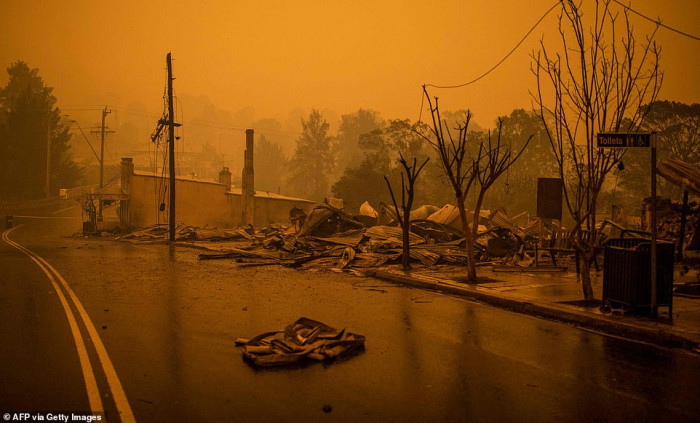 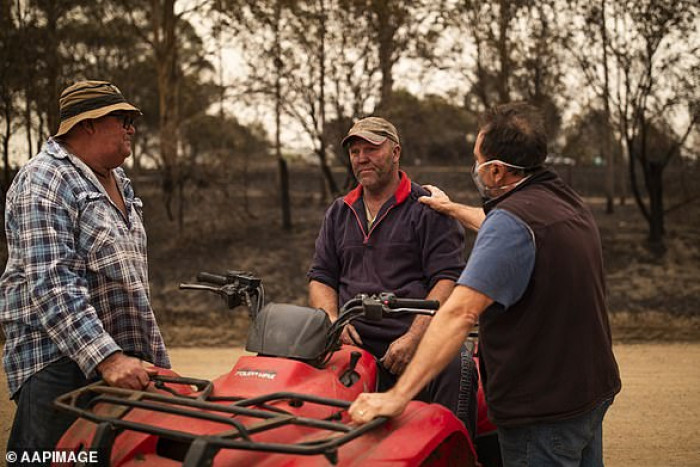 In an area where four people perished in a ferocious fire, Steve Shipton's eyes were burning as he tried to save his home.

'I thought I was a goner,' the Coolagolite cattle farmer told AAP.

The Countegany/Dampier State Forest blaze raced through Cobargo and Coolagolite on Tuesday morning on its way to burning an area twice the size of Canberra.

Three men and an unidentified person died out of a population of about 1050.

Mr Shipton thought he was fine to protect his home after getting his wife and kids inside and his stock out to a dirt clearing.

'It all happened so quick,' the 46-year-old said, soot still covering his face.

'I stayed out. I suppose I shouldn't have but it just happened so fast.

'It's just unbelievable. The ferocity and how quick.... That's what shocked me and that's why I thought we were in a good situation to survive,' he said.

The dairy-turned-beef farmer estimates he lost about a tenth of his 250-odd head of cattle, including his favourite dairy cow. 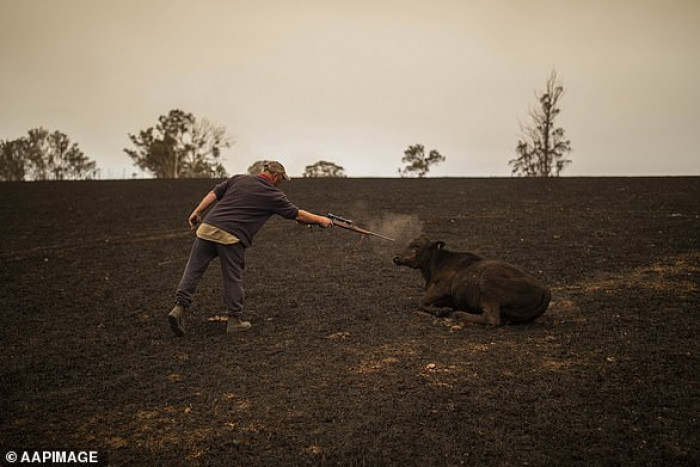 Most of the cattle had been where Mr Shipton thought would be safe - on dirt with a feed rack - but the animals 'obviously panicked'.

A vet on Wednesday assessed which would survive and which needed to be euthanised, leaving Mr Shipton with the grim task of carrying out a mass mercy killing.

'There are some in there badly scorched,' Mr Shipton said.

'He'll know better than me what can survive and what can't because I've never been through this scenario.

'You don't want them to suffer.'

The firefront spared Cobargo artist Sally Wilson's shop but embers took hold of the historic property as she and her partner Christopher Lee protected their home and animals a short walk away. 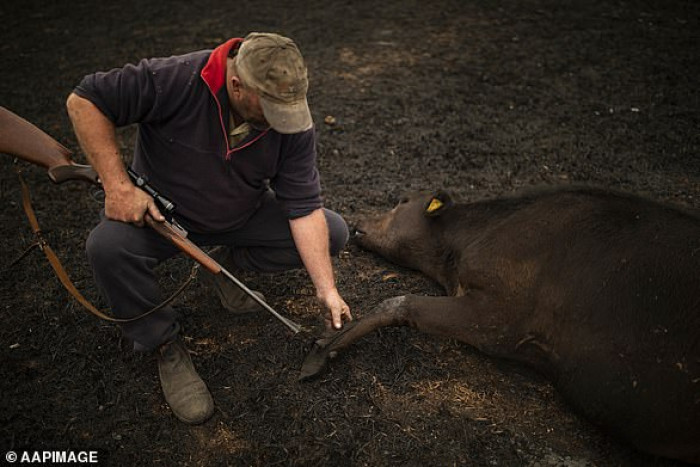 As things calmed down at home, Mr Lee walked over to the shop to find it alight.

'The firefighters said it had started 20 minutes before,' she told AAP, standing beside the rubble.

'He stood out the front and watched it burn.'

The couple moved to Cobargo just 18 months ago after deciding it was 'a really safe pocket' with a vibrant, caring community.

'I've been visiting here for years and it was like nothing could get you,' she said.

Local farmer Greg Tett said the community was a very tight-knit one, where people 'dove in' to help those whose chips were down. 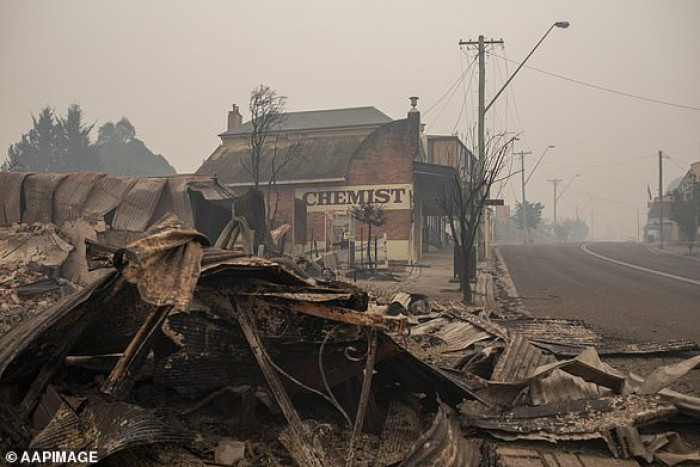 'That's the way it's been for a long time and why I think a lot of people like to come here,' he told AAP.

He suspects he'll have to entirely de-stock after 95 per cent of his 110-acre property was scorched.

Mr Tett woke about 1am on Tuesday to a phone call from his daughter warning about the approaching fire.

'When it came down the mountain, we had spot fires everywhere,' Mr Tett said.

He said his family will fight on.

The community still can’t come to terms with the fact that they have lost the dairy farmer Patrick Salway, 29, and his father Robert, 63, who perished while desperately trying to save their home from the fire.

Mr. Morrison later stated that he wasn't 'surprised people are feeling very raw at the moment.

'And, that's why I came today, to be here, to see it for myself; offer what comfort I could.

'But you can't always in every circumstance, I think everyone understands that,' he said.

This visit comes as NSW Premier Gladys Berejiklian proclaimed a weeklong state of emergency ahead of predicted disastrous conditions.

Patrick Salway, 29, (pictured with his pregnant wife Renee) lost his life while fighting the fires in Cobargo alongside his dad Robert Salway 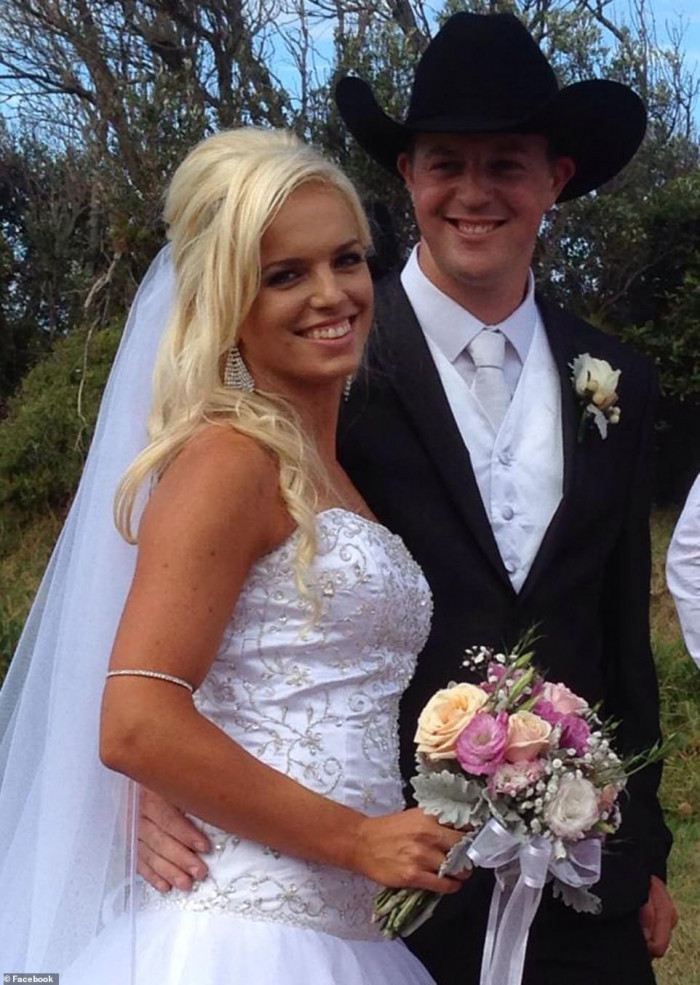 What does a state of emergency mean?

Declaring a state of emergency relinquishes decision making powers from the NSW government and allows RFS Commissioner Shane Fitzsimmons more control over his team of firefighters.

For the next seven days during the state of emergency, can now control and coordinate the allocation of government resources, close roads and evacuate residents.

Ms Fitzsimmons now has the ability to:

Control and coordinate the allocation of government resources

Close roads and thoroughfares to traffic

Pull down or shore up infrastructure at risk of collapse

Shut down utilities in the declared area including electricity, gas, oil and water

Enter or take possession of property for emergency response

NSW Premier Gladys Berejiklian previously said the 'decision to declare a state of emergency is not taken lightly.

'You only declare states of emergency when it's absolutely necessary and on expert advice from commissioners.'

It is the third state of emergency she has declared since the start of this year's horror bushfire season, which has seen at least 18 people die and thousands of homes destroyed.

This picture taken on December 31, 2019 shows a firefighter in an effort to secure neighboring houses from blazes near the town of Nowra on the NSW south coast 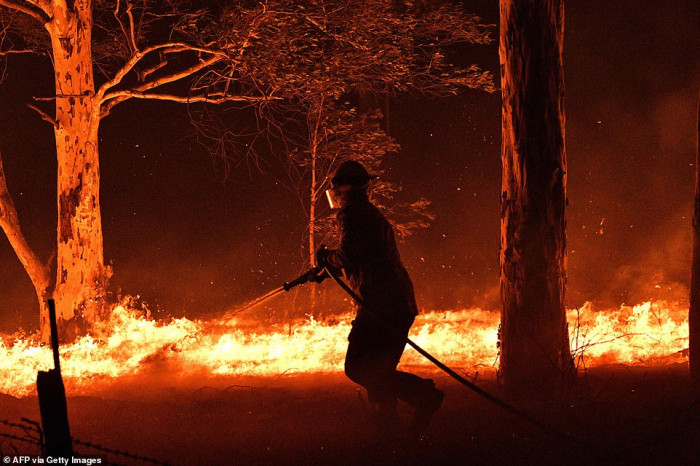 Residents met in the Mallacoota town hall for an evacuation briefing by defense force officers, after the town was encircled by blazes. 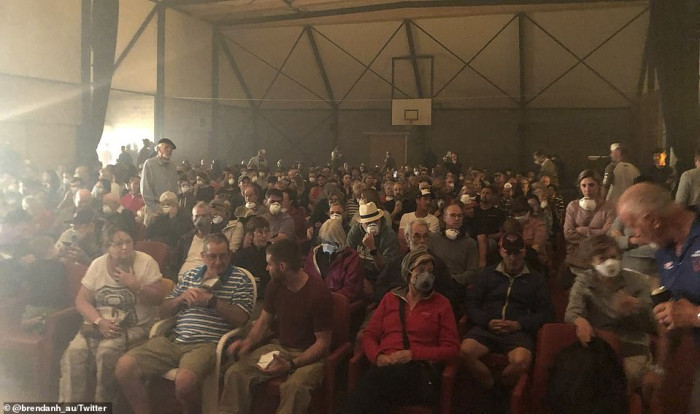 Temperatures are likely to hit 46C in some parts of the state and combined with powerful winds make for potentially catastrophic conditions.

A state of emergency surrenders decision-making functions from the government to the head of the NSW Rural Fire Service.

Thousands of people will be evacuated.

Devastating conditions that fueled the fires on the New South Wales south coast and in eastern Victoria on Wednesday will come back within 48 hours, giving fire services little time to organize.

RFS Commissioner Shane Fitzsimmons told 'dozens' of homes in the country town were demolished in the fires.

Mr. Morrison earlier defended the government's management of the disaster.

'What we won't allow to happen is for governments to be tripping over each other in order to somehow outbid each other in response,' he told.

'What we are saying is we cannot control the natural disaster but what we can do is control our response.'

Australia is hovering on the edge of a humanitarian crisis as remote areas stay cut off from medical help, food and fuel supplies run low, and the water resources drying up. 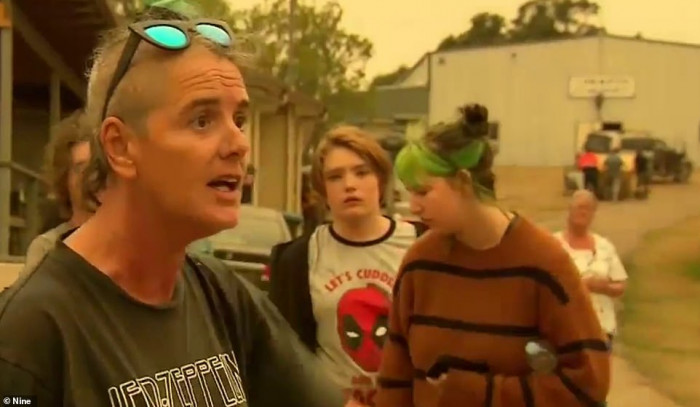 NSW Bushfire Crisis: What do you need to know?

WHERE ARE THE NSW BUSHFIRES?

More than 110 blazes rare burning across NSW on Thursday afternoon, with about 50 burning out of control.

HOW MANY HAVE DIED?

Seven people have died since Monday evening, taking the NSW bushfire death toll since July to 15. This number includes the lives of three firefighters.

HOW MANY HOMES HAVE BEEN LOST?

At least 382 homes have been demolished on the south coast since New Year's Eve. The number will certainly increase as damage evaluation teams gain access to hard-to-reach regions.

1298 homes, 85 facilities, and 2218 outbuildings have been confirmed obliterated through the NSW since July.

Victorian authorities want the people to leave the state's alpine and East Gippsland.

Fire weather improved on Thursday, letting firefighters get ready for worsening conditions over the weekend.

Hazardous fire conditions are expected to come back to southeast NSW on Saturday, where the temperature is expected to reach 45C inland and 44C on the coast.

A gusty southerly is expected to cross over to this area in the afternoon.

Motorists must avoid travel to the south coast and Snowy Mountains-Riverina areas.

The Princes Highway north of Batemans Bay has is open again, with a lowered speed limit of 60 km/h.

Parts of the Princes Highway south of Batemans Bay are still closed.

The Snowy Mountains Highway is open between Bega and Adaminaby, giving a route back to Sydney and Canberra for drivers on the far south coast.

The Adaminaby to Tumut section of the highway is open just for the residents whereas several other major alpine roads are exit-only or totally closed. 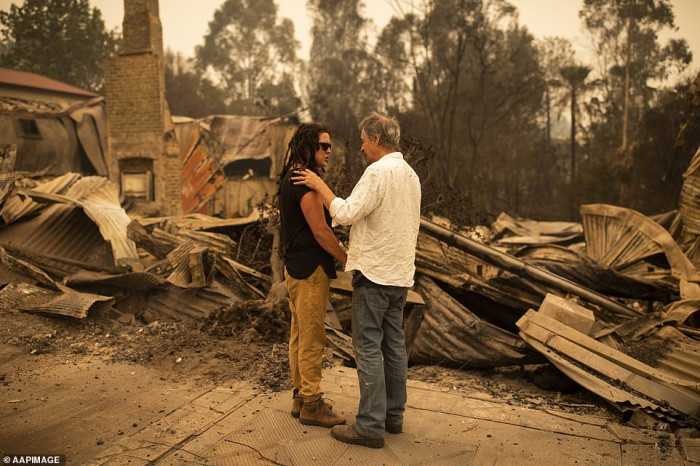 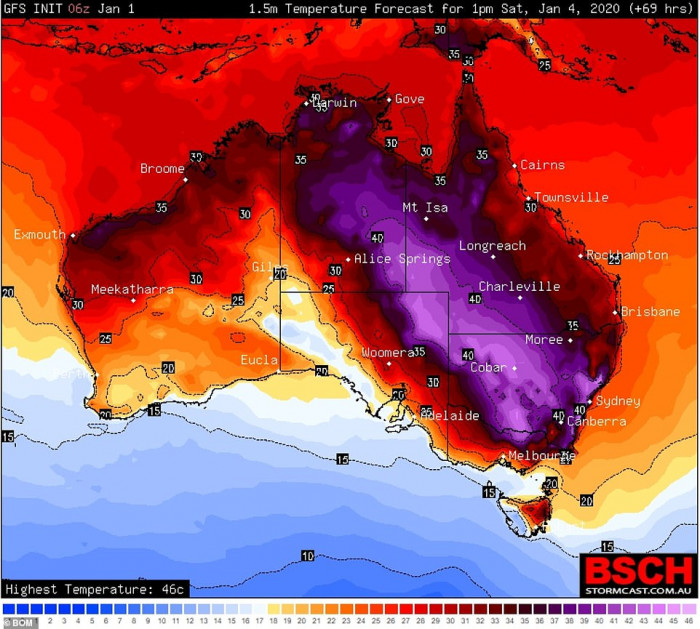 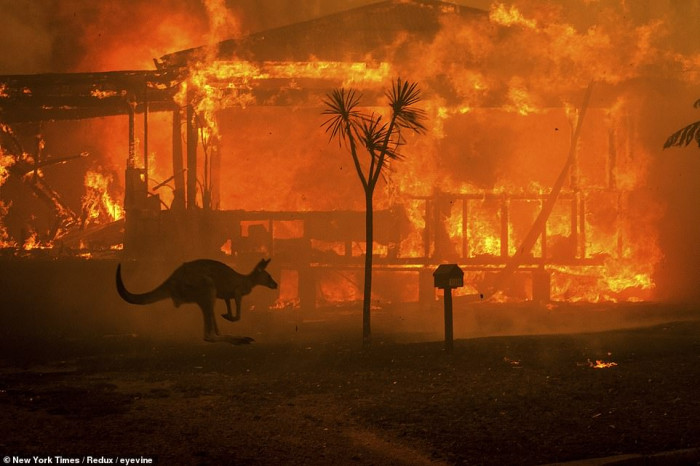 If you'd like to donate to the Australian bushfire relief, any amount will help.

Here are a number of places accepting donations: