Tim Burton is practically an entire aesthetic. There is no mistaking when his magic touch has embraced a film or a story in any capacity. His work is distinct, unique, and so far has not warn out it's welcome in our hearts and media players. For nearly 50 years he has been active in Hollywood in some capacity, so for us to still eat up his work with eager desire for more is impressive.

The real questions are more to the tune of what emotions does Tim Burton best capture in the films we love so much? Most people might suggest a creepy or gothic vibe emits from everything he touches, but my opinion is that he is a king of romance and I'm ready to give some undeniable examples of why.

I mean, truly, how many characters of his have fallen in love at first sight? From the young Ed Bloom and Victor Van Dort to Edward Scissorhands... many. So romantic.

The characters he chooses for leading romance roles.

Romance movies are filled with alpha males and really nice hair. Tim Burton makes romance movies for the rest of the world. The shy, the awkward, the imperfect. Love is for everyone and Tim Burton's films help emphasize that.

His characters are always hopelessly dedicated to their love interests.

For example, in Sweeny Todd, Anthony admired Johanna through a window, singing to her from outside until they finally wed.

Even more dedicated might be Big Fish's Edward Bloom, who saw Sandra at the circus then proceeded to work there for three years. His job? Shoveling elephant dookie. He did it all just to find out who she was because he knew she was the love of his life.

Burton has two ways of having his characters express their love once they find it and they're both amazing.

The first way is the over-the-top, seriously heart-melting romantic like Edward Bloom who planted Sandra's favorite flowers outside so she could see nothing but them and him standing in them. Um, the bar has been set really high, dudes.

The other example is a little less grand but all the more special because it's realistic.

The subtle messages of friendship and love, devotion and commitment... these tokens of adoration are sprinkled throughout his love stories and they're so relatable it's ridiculous.

Let's not forget the wedding vows from Corpse Bride or yet again how mind-blowing and heart-warming the romance in Big Fish is.

Even death doesn't squash their devotion.

Take Beetlejuice for a stunning example of love after death. Adam and Barbara were stunned to learn they're dead but delighted in the idea of an eternity together. 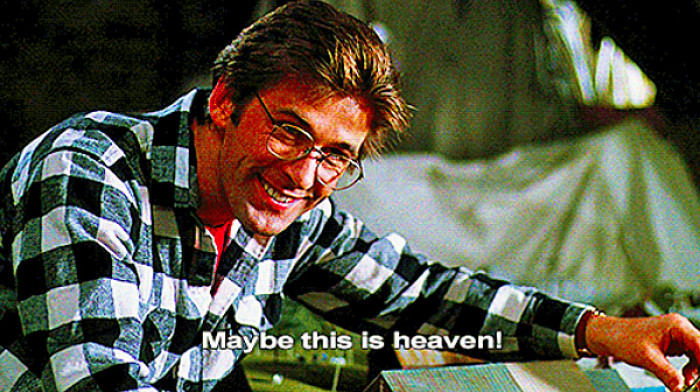 Just like in real-life, Burton throws opstacles and imperfections into his romance stories.

Even Edward Bloom, one of the most romantic characters ever in a Burton film had an affair.

Not to mention doubt.

Sally in Nightmare Before Christmas wondered if she would ever end up with Jack. He was too distracted to notice her but that did not stop her devotion, did it?

Edward had to watch Kim date a total jerk for awhile. That was horrible! 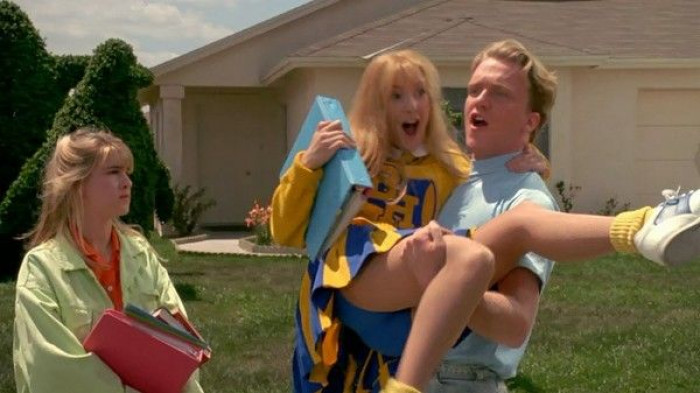 Anyone in a Burton movie is capable of finding love.

If Gotham can help Vicki Vale find love in a spandex wearing vigilante, then anyone can find love. 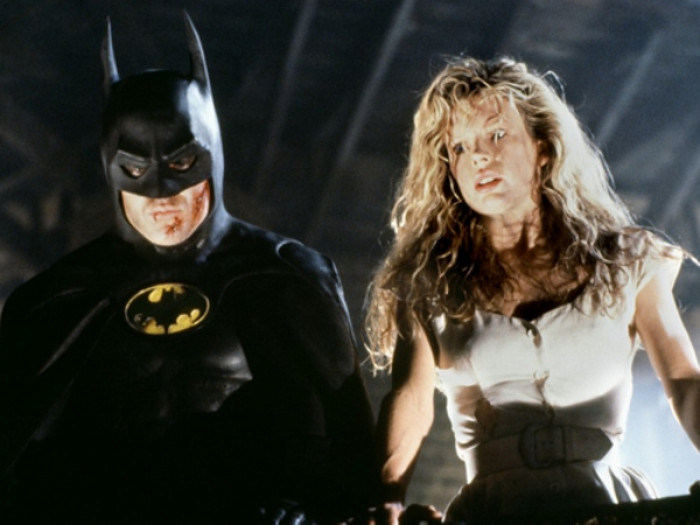 Another common theme in Burton's romance stories is that "love is blind." Two worlds collide, differences are out the window. From a bubbly cheerleader and a scissor-handed goth to a human and an ape. Love is blind.

Plus since I can't ever erase the image of Mark Wahlberg kissing an ape-woman, neither can you. 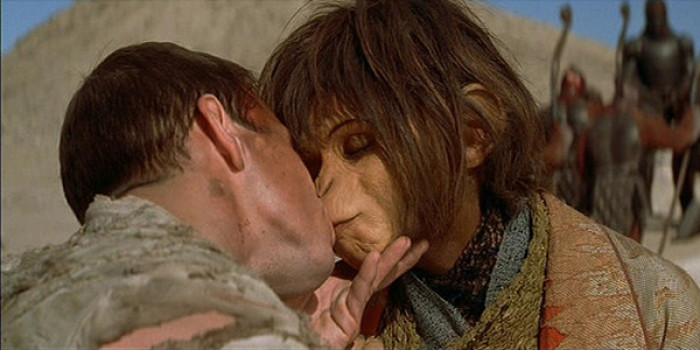 via: Planet of the Apes

Even for dedicated loners. 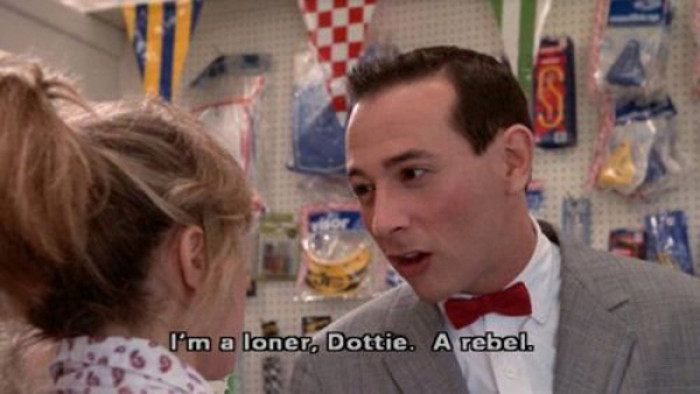 In fact, while most romances depict love as some sort of fairy tale, Burton depicts it as a journey.

A reality with hardships, highs and lows, mistakes, and reconciliations.

Emily loved Victor, he was her chance for true love. But she knew he wasn't hers and she sacrificed so that he could be with his soulmate. She waited decades for her chance to be a bride and then she let it go and found peace instead. 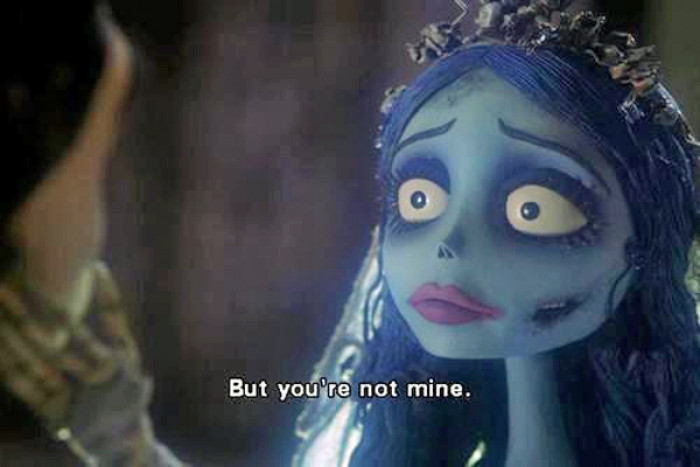 Sacrifice pops up in his stories frequently, actually.

Kim and Edward, despite their love, went on their separate ways. While Edward goes back to the hill to indefinitely make ice sculptures for Kim, Kim goes on to live a "normal life." 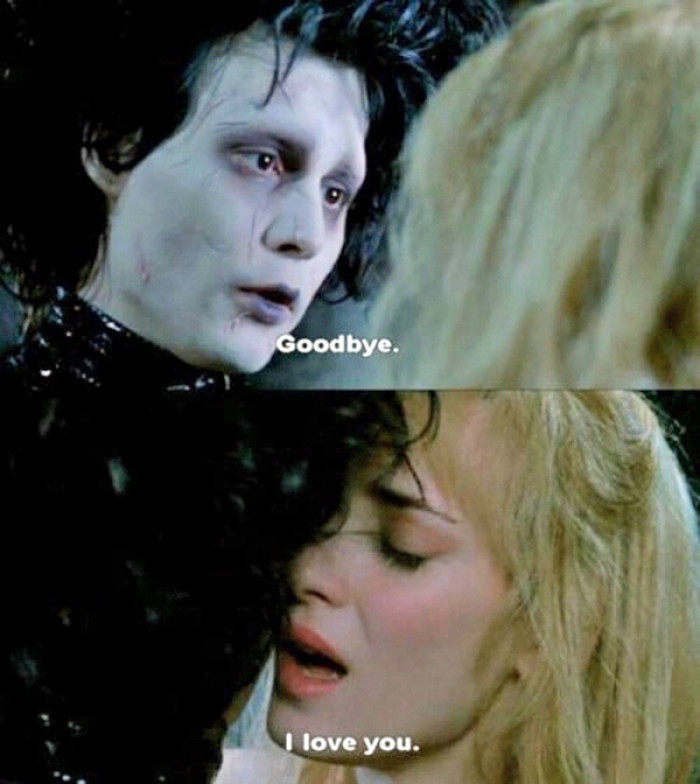 Have you ever listened to the music this man chooses? His consistent work with Danny Elfman is a gift itself.

Burton shows the longevity of love.

Love isn't just for the young and wreckless in Burton's films. 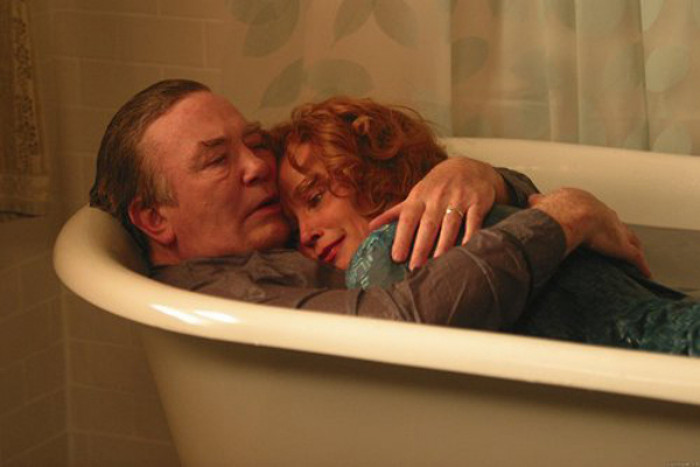 Longevity + Death? He's covered that, too.

In Beetlejuice, Adam and Barbara were summoned from death into the land of the living to entertain the selfish mortals and as they rapidly decayed they never stopped looking to each other lovingly. Devotion to the very end. 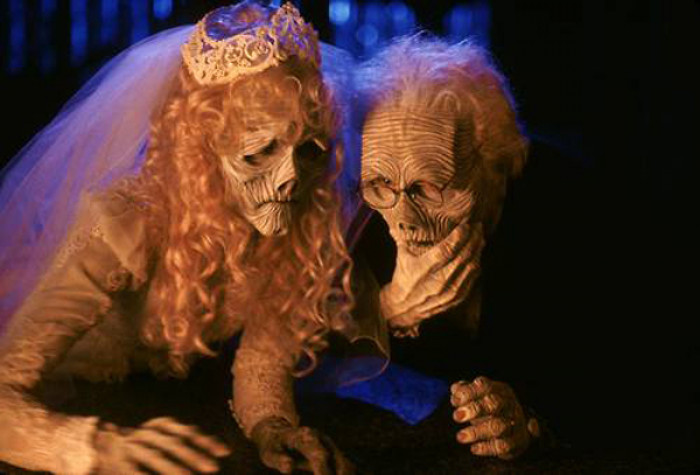 One of the most unusual yet simultaneously heart-warming and relatable romances was between the Pumpkin King and the ragdoll.

The Master of the Magical Embrace

How two people come together in an embrace on film is no small task. It has to be just right for the magic of cinematography to be capable of sucking you into the moment. Clearly, Burton is a master of it. 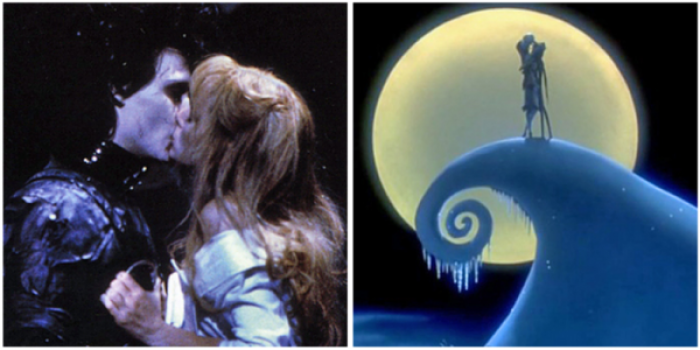 Tim Burton truly shows us how love should feel.

In fact, I'll take any romance Tim Burton wants to throw our way and soak it up. 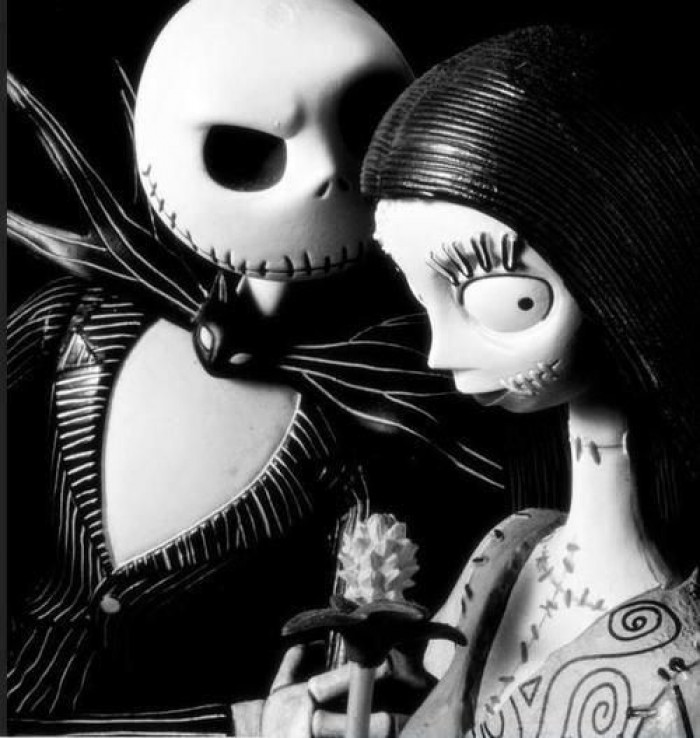