Unfortunately, men are rarely shy about expressing their opinion. Even more unfortunately, they like to comment on the appearance of women. For some bizarre reason, they actually expect their opinion to matter to us. What’s more; they tend to expect us to change how we look according to their preferences. Which is weird enough when it comes from a man we know and (possibly) like.

But why do men that we don’t know feel the need to offer up their opinion on how we look? This is a problem that many women have to deal with, not only in their personal lived, but also in a professional setting. Not only is it messed up, it is also completely inappropriate.

Environmental scientist Joleah Lamb took to Twitter to ask whether other people had experienced criticism for their appearance in an academic setting...

Stories and opinions please: I complimented a graduate student’s amazing sparking pineapple earrings at a conference and she told me she keeps getting told to not wear anything that ‘stands out’ - including prints, large jewellery, and bold colors! 🤯

One of the responses came from geologist Stephanie E. Suarez

I just made my appointment for my second tattoo 🤷🏻‍♀️ and gonna redye my fire engine red hair this weekend. Got yelled at by an engineer at Chevron via linkedin for it. In my opinion commenting on someone's appearance is more unprofessional than what I have on my arms or hair. pic.twitter.com/U5jrHawAFl 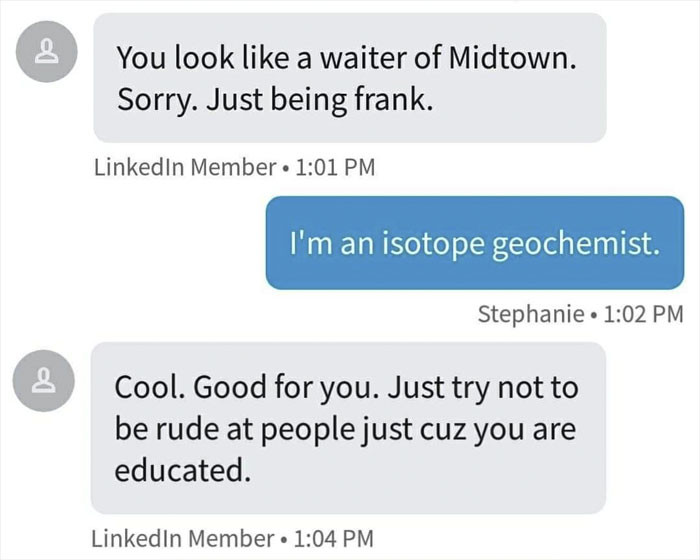 People were outraged and, rightfully, asked who on Earth would start a conversation by telling someone they look like a waitress??

Engineers at Chevron apparently. Him hitting on me is what started it. When I posted it on a public post asking for this to stop, people told me I was being unprofessional. I got a ton of hate messages. So I deleted my LinkedIn because I didn't feel safe on there anymore. pic.twitter.com/5LQczeV6mR

Suarez initially called out the man who made the comments, however received so much backlash that she removed the post.

Also omg, my updates have not stopped. I wish I woulda saved the names of every creep that threatened me when I initially shared his name on a post on linkedin but I was so emotionally distraught and just wanted it to all go away.

The worst part? Even some of Suarez's women peers thought she was out of line.

Simply for speaking up about professional harassment.

Found one of the response I got on that day. Didn't save her name tho. You can imagine what I was feeling when not only was I harassed, I had women geologist, who I thought would stand in solidarity with me, ridiculing how I handled being harassed. pic.twitter.com/uLwCvNpifM

Did you HAVE to? Really?

"I had to express my candid feelings" pretty much sums up any dude who wants to go jump in someone's Dms to bitch about hair color.

Suarez isn't the only scientist that has received harassment via LinkedIn, a "professional" networking service.

... and there is nothing wrong with a waiter of Midtown!

How someone uses their appearance to express themselves doesn't change their ability to work.

I've got tattoos, one easily visible. I do not dress in feminine fashion and don't own make-up. Doesn't affect my output. Happiest places I've worked are where folks can be themselves. Don't understand why that's such a problem for some. Sorry you're dealing with that!

Suarez clearly worked hard to be where she is and damn right she should be proud of herself!

Support women looking however they want to!

As well as calling out sexism, Suarez also draws attention to how socioeconomic circumstances affect students.

Then I realized we're from 2 completely different worlds. These people will never come to my neighborhood. They will never walk the halls of my high school or the rooms of my childhood home. They'll just pretend to care about diversity when recruitment season comes up.

Have you ever been proud of someone you've never met?

Because I sure have!

Thank you for the support everyone ❤. I figure out how old rocks are. Recently stepped into the planetary community when I started placing ages on Martian meteorites. Starting my PhD this fall, just finished my Masters last week. pic.twitter.com/KyaDCOhcsb